The store will not work correctly in the case when cookies are disabled.
Artikelnummer
SCODAV1E6
Autor
Nigel Davies 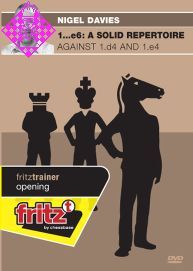 Many players struggle to find solid openings to play as Black, especially if they have relatively little time to study theory. This DVD addresses this problem, presenting a solid and easy to learn Black repertoire against White's two main opening moves, 1.e4 and 1.d4.

Against both of these moves Nigel Davies advocates 1...e6, which leads to a French Defence after 1.e4 e6 2.d4 or 1.d4 e6 2.e4.This can get quite sharp and theoretical if Black follows the main lines but Davies shows how he can avoid the theory of both 3.Nc3 and 3.Nd2 with GM Oleg Romanishin's patented line, 3...Be7.

After 1.d4 e6 2.c4 Davies recommends another rarely played move, 2...Bb4+, a speciality of the great Paul Keres in his youth and more recently GM Vereslav Eingorn. Against 1.d4 e6 2.Nf3 Black can transpose into a Bogo-Indian with 2...Nf6 3.c4 Bb4+. The presentation is rounded off by showing how Black can meet various Queen's Pawn Games to form a complete, easy to learn yet sound way to play.

Nigel Davies has been an International Grandmaster since 1993 and is a former British Open Quickplay and U21 Champion. He has played the lines presented here in his own games and worked extensively as a chess coach.