The store will not work correctly in the case when cookies are disabled.
Artikelnummer
SCOFTA1NF3
Autor
Ljubomir Ftácnik 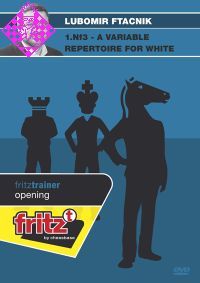 1.Nf3 - a variable Repertoire for White' is the name for a comprehensive opening system strategy based on security and choice. The old maxim of perceiving 1.e4 openings as tactical and more dangerous as opposed to the more positional and peaceful 1.d4 openings no longer reflects the modern world of chess openings.

This repertoire DVD is the fruit of a lifetime's experience, as the author Lubomir Ftacnik uses it actively in his practice. The system gives all White players the chance to fine-tune the level of exposure and risk - from the main lines of all the great 1.d4 and 1.c4 openings all the way to the concept of playing "Black" lines with

an extra tempo - as in the King's Indian in reverse. The explanations deal with all the big challenges - the English Opening, Nimzo-Indian systems, the Catalan, the Dutch Defence and of course that annoying reply 1...d5.