The store will not work correctly in the case when cookies are disabled.
Artikelnummer
SCOKASAMGFE
Autor
Rustam Kasimdzhanov 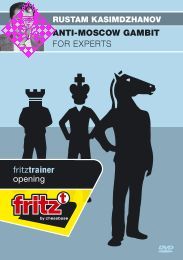 After the moves 1.d4 d5 2.c4 c6 3.Nf3 Nf6 4.Nc3 e6 5.Bg5 h6 6.Bh4 dxc4 7.e4 g5 8.Bg3 b5 (D43) the Anti-Moscow Gambit arises on the board which currently is one of the most hotly contested openings in grandmaster practice. No top tournament in which this position is not discussed in the games of the star players, with novelties sometimes appearing in therhythm of only a few days. Ex-FIDE World Champion Rustam Kasimdzhanov gives an introduction into the youngest development of this variation, starting with the game Radjabov - Anand played at the Chess Classics in Mainz in August 2006. His chronological presentation of the events is as exiting as a thriller, the 'scenes of crime' being the top tournaments of the last two years (among others the Word Championship Mexiko City 2007, World Cup Khanty-Mansiysk 2007, Wijk aan Zee2008) and the actors the players of the absolute world elite.

At the tournament in Wijk aan Zee 2008 Topalov, to the amazement of the chess world, opened a completely new chapter of the variation by beating his archrival Kramnik in the style of the masters of the 19th century, sacrificing a knight with 12.Nxf7 early on. Don't miss this chess thriller, enjoy the presentation of current chess theory on highest level in 3.5 hours of video.

Rustam Kasimdzhanov. Born in 1979, the grandmaster from Uzbekistan has for many years been known as a very strong and imaginative player. However in 2004 Rustam Kasimdzhanov shocked the chess world by winning the FIDE world chess championship title, beating a string of world-class players like Ivanchuk, Grischuk, Topalov and Adams in the process.