The store will not work correctly in the case when cookies are disabled.
Artikelnummer
SCKASATK
Autor
Rustam Kasimdzhanov

Attacking the King - for experts 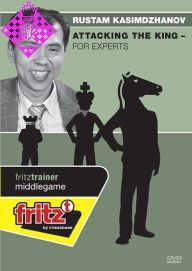 Ever since the beginning of chess, the assault on the king has had its own special magic; masterly attacking games, crowned by sacrifices and unforgettable combinations, have never ceased to attract and thrill the audience. On this DVD in fritztrainer video format, Rustam Kasimdzhanov shows us that particularly the World Champions were outstanding attackers from who we can learn a lot. From Steinitz, Lasker and Capablanca to Fischer, Karpov and Kasparov, one exemplary attacking game is presented reflecting the individual playing attitude of each of these chess legends. The second part of the DVD is dedicated to games of Kasimdzhanov‘s own practice. In his typical vivid and instructive manner, he comments on the decisive stages of the attack explaining the spectator which specific train of thought led him to success during play. The result is an entertaining outline of historical and modern attacking chess,giving you all the skills required to succeed in your own practice. Video running time: 4 hours. This fritztrainer can also be run with Pocket Fritz 3 (audio format).

Rustam Kasimdzhanov. Born in 1979, the grandmaster from Uzbekistan has for many years been known as a very strong and imaginative player. However in 2004 Rustam Kasimdzhanov (pronounced “Kah-zeem-jha-nov”) shocked the chess world by winning the FIDE world chess championship title, beating a string of world-class players like Ivanchuk, Grischuk, Topalov and Adams in the process. Kasimdzhanov is a very deep player, who is able to explain chess ideas in an eloquent, lucid style, with a fine touch of humour. His lessons are both entertaining and instructive – perfect for students who seek to avoid “dry” theory.