The store will not work correctly in the case when cookies are disabled.
Artikelnummer
SCOKASBTF3
Autor
Rustam Kasimdzhanov 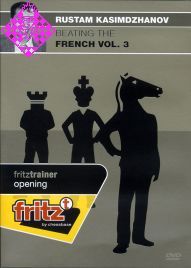 In his DVD series on the French Defence, Rustam Kasimdzhanov presents a promising White repertoire based on 3.Nc3. Subject of the third DVD is the position after 1.e4 e6 2.d4 d5 3.Nc3 dxe4 4.Nxe4. White has a space advantage in the centre, (pawn d4 versus e6), yet Black strives for equality by piece exchanges and the break c7-c5. Explaining top grandmaster games, Kasimdzhanov shows how White can fight for the advantage. In 11 video lessons he reveals the most important strategies and plans, analysing both sharp attacking performances and patiently won endgames. This way, studying Kasimdzhanov's commentaries will not only help you to master to a particular opening variation, but also vastly improve your chess understanding in general. Video running time: more than 3 hours.