The store will not work correctly in the case when cookies are disabled.
Artikelnummer
LOCOXDWD4D
Autor
John Cox 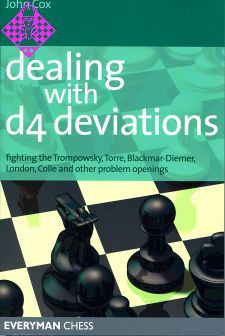 This book fills an enormous void in chess literature. There are a countless number of players who are very happy to defend the black side of the Queen's Gambit or play the Nimzo-Indian, Queen's Indian, Bogo-Indian or Benoni. However, more often than not they have been forced to muddle their way through a whole variety of annoying sidelines White has at his or her disposal, including the dreaded Trompowsky, the tricky Blackmar-Diemer Gambit and the tiresome Colle Variation. Now finally help is at hand! In this unique book John Cox reveals everything Black players need to know about all of White's offbeat tries, presenting Black with no-nonsense answers to every white option. Read this book and you will be fully armed to deal with anything that White can throw at you. In fact, you'll have all the White players running back to the main lines!

John Cox is a FIDE Master and a former junior international and British Junior Champion. This is his second book for Everyman Chess; his first was Starting Out: Alekhine's Defence .

I begged Everyman Chess to let me write this book. All my chess-playing life I have had a terrible record against these feeble variants, as I saw them. The final straw was being utterly slaughtered by Richard Pert in a London league match in the 4 e3 line in Chapter 9. I wanted the incentive to study them and give myself the opportunity to put this right. And for me, it's worked splendidly. I believe I have really learned something about these systems, and if I am able to pass on to the reader the confi-dence I have now gained myself, then the job will have been well done.

I hope this book is a sort of left-handed version of John Emms's popular Play the Open Games with Black. White has a succession of irritating, solid yet reputedly harmless openings after 1 d4, and just as the Situation was with 1 e4 before John's book, it's very difficult to get the theory on them without buying a whole slew of specialist books on each one, often for the sake of one sub-variation in one chapter. With the aid of this book I hope the reader can put all these openings to bed with one pur-chase, and leave himself free to focus on the main defence he employs to d4.

I have assumed that Black is planning to play one of the Slav, Semi-Slav, Queen's Gambit Declined, Nimzo-, Bogo-, or Queen's Indians, or the Benoni through the 2...e6 move order. King's Indianers, Grünfelders and the like were well served by Joe Gallagher's Beating the Anti-King's Indians, and I've no Intention of trying to compete with that. So I shan't be fianchettoing Black's king's bishop, but I've aimed to equip players of any of those defences with everything they need to combat White's various System openings and deviations before we get into the Nimzo or whatever proper.

The white Systems which are covered are the Trompowsky Attack, the Queen's Bishop Attack, the Veresov, the Colle, the Colle-Zukertort, the Torre Attack, the London System, the Stonewall Attack, some quiet g3/e3 ways of avoiding the Be­noni, the Blackmar-Diemer Gambit and some Subsystems which don't even have names. You should be equipped to face any reasonable deviation by White from whatever your main defence to 1 d4 may be.

I've given two set-ups against some of the more popular 'system' openings: the London, the Colle, and the Torre. Against the Trompowsky I think there is a stand-out choice for Black and I've simply gone for that, and pressure of space has also confined me to one System against the Veresov, although again I think it's a good 'un.

I think it's worth examining why I used to do so badly against these systems. Dealing with these openings successfully is a matter of psychological approach among other things - it's not by chance that every work from Black's point of view called them 'annoying' or some synonym. I set out what I now feel were my main failings in this area in the hope others might recognize some of theirs and be inspired to remedy them at less cost in points than I managed.

1) The most obvious point - I didn't actually have a repertoire at all against, say, the Colle. You just play chess, right? Develop the pieces and equalize.

I remember Grandmaster Vlatko Kovacevic playing the Colle against me back before databases. I had no idea this was his customary weapon of mass destruction, and I thought I must have sat down at the wrong board. A GM playing 3 e3??

With that attitude, it won't surprise you to learn I got torched on the kingside around about move 25. Only the fact that the game was played in a comparatively minor event has saved me from appearing in every Colle book since on the wrong end of a classic White crush. Time has mercifully obscured the details, but I know I went ...d5 and ...c5. Pretty soon a knight appeared on e5 and I didn't seem to be able to shift it. Shortly after that, either the h- or the g-pawn arrived on the premises. Then came Re3, Qh5, and the next thing I knew I was looking like something out of 1001 Winning Chess Combinations. That wasn't the only such debacle, either; every time my opponent played one of these vile things I was behind on the clock as I worked on my conception of the wheel, and just as you'd expect some of my wheels came out square. Hopefully the remedy to this is obvious - you hold it in your hands.

2) I was bored by these openings: I didn 't consider them interesting.

There is probably some objective sense in which these openings are not as interesting as the main lines. But to let that affect me was childish. I should have reflected on two things. One, winning any game is more interesting than losing any game. Two, in any chess position there are good moves and bad moves, and telling them apart is fundamentally what the game's about. If you find some types of position more inter­esting than others, that's a comment about you, not about the positions. I should have recognized that and if necessary taken a moment to refresh my gumption tank when 2 Nf3 hit the board (if you don't know what your gumption tank is I recommend Jonathan Rowson's Seven Deadly Sins).

Again, dumb. In the 1930s the top guys didn't know whether these openings or the Queen's Gambit were better.' These were the 2700s of their day; they understood chess a lot better than I do, and if something wasn't obvious to them, it was arrogant of me to think it would be obvious to me if I just figured it out over the board. I could list easily a hundred 2550+ players who have succumbed to the openings in these books. These openings produce as red-blooded a struggle as any, and if you're not ready for it, you're starting at a big disadvantage.

4) A less obvious point, this: to combat these openings successfully requires a good knowledge of many structures. A good chess education, in fact.

In this book there are transpositions to the Semi-Tarrasch Variation of the Queen's Gambit Declined (QGD), the e3 Queen's Indian, the Bg5 Queen's Indian, the Queen's Gambit Accepted (QGA), the Symmetrical English, the Caro-Kann, the a3 Queen's Indian, the French, die Sicilian, the Slav, the Karpov Nimzo, and more. Not the most critical lines necessarily, but the same structures. And many of these open­ings are in fact black openings reversed. Transpositions are commoner than in other openings: getting the exact set-up you want can require a lot of thought in the early stages. Nothing much to be done about this except recognize the fact and welcome it, both in building a repertoire and at the board.

5) I didn't experience the adrenalin surge I got defending 'my' openings.

Playing your pet defence is like a football team playing at home. You're defending your ideas, your choice of set-up, to some extent what you believe in about chess. Meeting some random deployment of the white pieces isn't like that. To some extent, solving problem '1' solves this problem as well, but still it exists. Again recognizing it is halfway to solving it.

6) Lastly, I wasn 't playing set-ups I was happy and had experience with.

I was 'playing in my opponent's garden' in fact. Both technically and psychologically, I was behind before I started. Again this to some extent disappears once you start to take these openings seriously, but still it's there. If someone has played the London System ever since 1952 (you know the type) then they have an advantage over you that isn't going to go away.

With some of these openings, there's nothing to be done about that last one. But with some of them, there is. If someone wants to play the London System, you have to recognize that the game's going to be pretty quiet for a long time. But with some other openings, you can do something about it. If someone plays the Blackmar-Diemer Gambit, it doesn't take Freud to work out they want to attack wildly while missing a pawn. The Tromp - well, they want an obscure struggle, probably with a Strange pawn formation. The Veresov? They probably like the initiative in open positions. The Torre? Solid non-critical play in the opening leading to positional pressure. And so on. In building a repertoire, I think it pays to remember that these guys play this stuff all the time, and you don't. You need something fairly simple and thematic, you want to stay off the hot theory of the opening - good or bad, he will know it better than you - and most of all you want to stay out of your opponent's garden. If he's offering a pawn for wild play, try and trade his queen off and obtain a complex semi-ending. If he wants a solid game, mix it if you can. And so on. These aren't original ideas, but I've tried to express them in the repertoire that follows. Sometimes, like I say, it can't be done. But when it can, it should be.

That's all. I've learned a huge amount from writing this book. There are several grandmaster move order tricks in here which are tremendously useful, and several crystal GM Performances which show exactly how it should be done against this or that opening. If I've managed to pass on half of what I learned, I don't think you'll regret the purchase.

Good luck in your games against these openings.