The store will not work correctly in the case when cookies are disabled.
Artikelnummer
LEMIEMOTE
Autor
Jaques Mieses

Manual of the End-Game 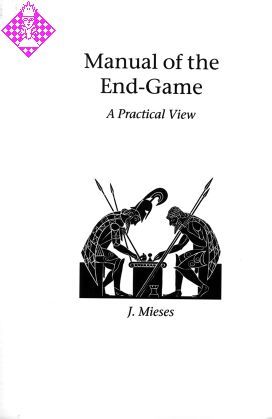 In writing the Manual of the End-Game the author has dealt with the subject mainly from a practical point of view. It is intended for the beginner who, though having acquired a certain degree of playing strength in the opening and in the middle-game, is weak when it comes to the end-game, owing to insufficient study. The opening and the end-game are open to analytical treatment and, therefore, in both of them theoretical knowledge is indispensable. The player who lacks it in either will be severely handicapped in his practical play. Of what use is it to the amateur who, after avoiding all the pitfalls of the opening and after a well-played middle-game, has obtained a good or even a winning position, if he does not know how to take advantage of it in face of his opponent's superior handling of the end-game? He is caught again and again by subtleties and tricks which should be familiar to him. The Manual of the End-Game contains nothing new, nor does it aim at presenting old matter in a new form. It offers the student nothing more than a concise extract from the vast field of end-game theory. In doing this it follows strictly the principle of treating only those categories of end-games which are most important to the player. In addition, a special chapter contains a number of subtleties and tricks with which the reader should become familiar. In another chapter are some general considerations of a common-sense character dealing both with the end-game itself and with the transition stage which lies between it and the middle-game. The purpose of the Manual of the End-Game, let us emphasise once again, is to serve only as a temporary guide and adviser in the chess career of the amateur who should by no means think that he can do without a deeper insight into the theory of the end-game. The player who knows nothing more of the end-game beyond what is given here will have only a slight foretaste of its real subtleties.

- From the original Preface