The store will not work correctly in the case when cookies are disabled.
Artikelnummer
SCEMUECE9
Autor
Karsten Müller 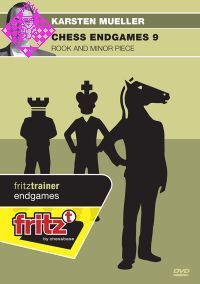 Endings with rook and minor piece against rook and minor piece occur very frequently, even more often than rook endings. But there is not much literature on them. The new endgame DVD fills this gap. The four different material constellations rook and knight vs rook and knight, rooks and opposite coloured bishops and same coloured bishops and rook and bishop vs rook and knight are dealt with. The last configuration has been split into two chapters as those endings where the side with the bishop is better are completely different from examples in which the knight is trying to win. Furthermore, the endgame expert looks at a few positions with four rooks to discuss the extremely important theme of the correct rook exchange. In view of the different material constellations Karsten Müller explains many guidelines like e.g. "With knights even a small initiative weighs heavily", "Opposite coloured bishops favour the attacker", "Space advantage and a good bishop are important with same coloured bishops", "Fighting against a knight the bishop prefers open positions and a fluid pawn structure, the knight wants to have full control". But Karsten Müller also wants to help you to train your intuition. After all the real art of the royal game can be best seen in the recognition of exceptions to the rules.