The store will not work correctly in the case when cookies are disabled.
Artikelnummer
SCOKASBTF2
Autor
Rustam Kasimdzhanov 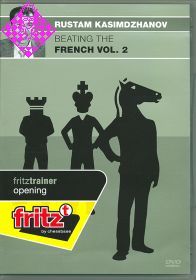 In his DVD series on the French Defence, Rustam Kasimdzhanov presents a promising White repertoire based upon 3.Nc3. Topic of the second DVD is the position following 1.e4 e6 2.d4 d5 3.Nc3 Nf6 4.e5 Nfd7 5.f4 c5 6.Nf3 Nc6 7.Be3. Very often this leads to a queenless middlegame or endgame with a white knight on d4 versus a bad bishop on c8 which offers White excellent winning prospects. In 13 video lessons Kasimdzhanov explains, in detail and easy to understand, how White has to proceed to be successful in this position. For players who prefer a dynamic middlegame with queens, he also shows (with games of Kasparov, Shirov and Kramnik, among others) how White can sharpen the fight and go for an attack on the king. Video running time: 3 hrs. 17 min.