The store will not work correctly in the case when cookies are disabled.
Artikelnummer
SCODAV1D6
Autor
Nigel Davies 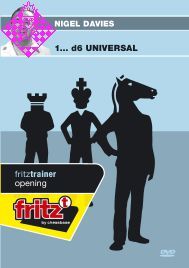 1...d6 can be used as a universal defence against every White opening, offering Black the kind of dynamic play that is absent from more traditional defences. If White eschews the chance to occupy the center with e2-e4 and d2-d4 it is often Black who gains space early on, and this can be used as the basis for a powerful attack on the kingside.

On this DVD Davies presents everything you need to know to convert the Pirc Defence into a universal system of counterattack, offering winning chances against every White opening under the sun. Video running time: 5 hours.

Nigel Davies has been a Grandmaster since 1993 and is a former British Open Quickplay and U21 Champion. He is an acknowledged expert on the lines presented here, having used them extensively in tournament practice.