The store will not work correctly in the case when cookies are disabled.
Artikelnummer
SCOCOLLFTOG
Autor
Sam Collins

Learn from the Open Games 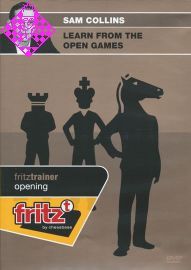 In this DVD Sam Collins explains the games from which he has learned the most, arising out of 1.e4 e5. Topics covered include: exchanges, attacking strategy, gambits and sacrificial play, opening selection, play with opposite coloured bishops, restriction of the opponent's pieces, play in queenless middlegames and endgame technique. The themes are of critical importance for an understanding of how to play the middlegame. However, Collins also gives a full explanation of the themes from the opening and early middlegame, making this an invaluable collection for players who play the open games with either colour, or who simply want to learn more about this central touchstone of chess development.