The store will not work correctly in the case when cookies are disabled.
Artikelnummer
LOSIMCNM
Autor
Ioannis Simeonidis 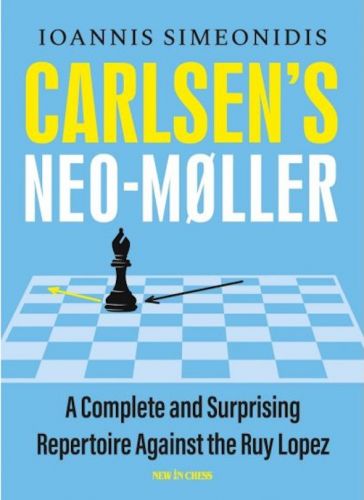 The Ruy Lopez is one of the most important chess openings, hugely popular with amateurs and masters alike. Black players allowing the Ruy Lopez main lines are usually condemned to passivity, defending a slightly worse (though solid) position for as long as White chooses this situation to continue.

World Champion Magnus Carlsen doesn’t like passivity. He likes unconventional and active systems that allow him to take command and put pressure on his opponent from early on.

That’s why Magnus Carlsen revolutionized the old Möller Attack, one of the sharpest and most uncompromising variations against the Ruy Lopez. As yet largely disregarded and unexplored by the majority of players, Carlsen’s new approach allows Black to break free early and start giving White a hard time.

FIDE Master Ioannis Simeonidis is the first to investigate this system, cover it in detail, and make it easy to grasp for club players. He has called it the Neo-Möller. Simeonidis has made lots of exciting discoveries, presents many new ideas and shows that it is a reliable and playable system.

Since the Neo-Möller is a very early deviation from the main lines, it’s easy for Black to actually get it on the board and take opponents out of their comfort zone. Simeonidis has created a compact, accessible and inspirational book. One thing looks certain: White players of the Ruy Lopez are going to thoroughly dislike the Neo-Möller!

Ioannis Simeonidis (1975) is a Greek FIDE Master and FIDE Trainer. He is a contributor to New In Chess Yearbook, the world’s leading publication on chess opening news. Simeonidis is the inventor of a recent new system in the Sicilian (the line 2.Nc3 d6 3.d4!?), also played by Magnus Carlsen.