The store will not work correctly in the case when cookies are disabled.
Artikelnummer
LGBOZFHAOOP
Autor
Richard Bozulich

Five Hundred and One Opening Problems 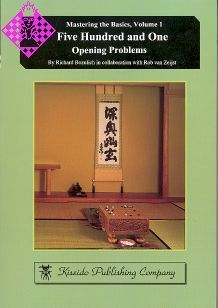 Along with playing games, practice is essential for mastering the opening; namely, familiarizing yourself with standard positions and knowing which principles to use for deciding your moves. However, the practice players get from their games is limited, whereas problem books such as this one can give the amateur go player a vast variety of positions that might occur in their games. Practice also keeps the mind sharp and in top form. This is the reaons professionals are always solving problems and often spend considerable time composing them.

Practice must also include repetition if it is to be effective. If you have to find the same kind of move in similar patterns over and over again, spotting that move in a problem or a game will become second nature.

It is the purpose of this book to provide a vast number and a large variety of opening problems for the inexperienced player. Because of space limitations, the explanations are brief. Some may complain that there are other reasonable moves that should be discussed. Indeed, that may be the case. However, we felt that it was more important to give the reader a feeling of what a good opening move is. To this end we have introduced each problem by stating an opening principle that can be used to solve the problem. We believe that by seeing how these opening principles are used in games, your intuition in the opening will become highly developed. These principles, which are also hints, will often give the answer away, so we recommend that you first try to solve the problem by covering up these hints. After you have arrived at your answer, look at the hint and see if it corresponds to your answer. If it doesn't, consider the problem again, then look at the answer.

The problems in this book were collected from various Japanese magazines and from games both professional and amateur, observed by Richard Bozulich over the last three to four years. Rob van Zeijst provided the commentaries.

Finally, I would like to thank John Power for proofreading the manuscript of this book. I also would like to especially thank Richard Hunter who provided the inspiration for this series. He not only proofread this book, but also suggested and thoroughly proofread the second volume in this series, One Thousand and One Life-and-Death Problems.

xii How to Use this Book