The store will not work correctly in the case when cookies are disabled.
Artikelnummer
LLSUKCC05
Autor
Igor Sukhin 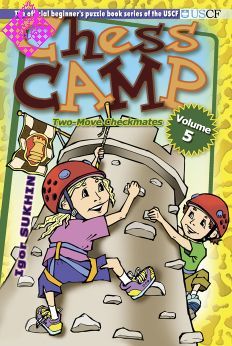 Chess Camp is a new training system for beginning chessplayers, and for the parents and coaches who teach them. Starting with simple problems to illustrate key concepts, and then progressing to more complex positions, the student will learn by doing, methodically integrating new information with previous knowledge while building effective thinking habits at the board.

In Two-Move Checkmates , the fifth volume in the Chess Camp series, the student will be introduced to the elements of planning, aiming at a goal beyond the current move; start to understand the need to consider the opponent's possible defenses; practice visualizing the board more than one move ahead; and discover the seemingly paradoxical idea of winning by sacrificing material.

Igor Sukhin has been using the game of chess for more than two decades to teach children. His books have been selected repeatedly as recommended reading by the Russian Department of Education.

The author of the acclaimed children's chess book Gary's Adventures in Chess Country (also published by Mongoose Press), Sukhin has written more than 100 titles, with over a million copies currently in print.

Checkmate in Two without a Sacrifice
007 King + piece vs. king

032 Victory in the opening

Checkmate in Two with a Sacrifice
038 King + two pieces vs. various pieces

102 Win quickly in the opening