The store will not work correctly in the case when cookies are disabled.
Artikelnummer
LMBOJACICT
Autor
Dejan BojkovVladimir Georgiev

A Course in Chess Tactics 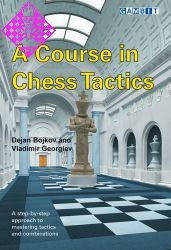 The advice frequently given to chess-players eager to improve their results is straightforward: study tactics! But there is often little useful guidance as to how this is best done. By solving puzzle positions? Or endgame studies? By dissecting the games of great tacticians?

Few books present a structured approach to tactics, so this book fills a valuable niche in the ambitious player's library. The authors present each major tactical theme in turn, explaining how it works and providing inspiring examples. They then explain how you can spot the idea in your own games and use it to your advantage. You immediately get a chance to put your knowledge to the test, as there are challenging exercises throughout the whole book, with detailed solutions.

The second part of the book offers more advanced material, and takes us inside the professional's tactics laboratory. Here we see how tactical themes are combined, and employed to achieve strategic goals. We are also shown how grandmasters spot the targets for their breathtaking combinations, which we thus come to see not as sheer witchcraft, but as the product of disciplined thought and training.

Bulgarian grandmaster Dejan Bojkov is an extremely active player and writer on chess, whose reports appear on chessbase.com and in Chess Today , among many others. Vladimir Georgiev is also a grandmaster from Bulgaria, who now plays for the Former Yugoslav Republic of Macedonia - he has won the national championship of both countries. He is the trainer of former Women's World Champion, grandmaster Antoaneta Stefanova.

Why are tactics so important?

Most of our readers will have asked themselves this question at some point. Tactics are the chess tools that everyone uses throughout every game. When we start our thinking process, the first thing that we do is calculation: "If I move here, he will answer there, then I will do this and he will answer that." We are also trying to discover new ideas, follow plans, and strategically outplay our oppo­nents. But in every stage of the game, tactics are following us, supporting our ideas, or ruining the plans of our adversary.

The then young Alexander Beliavsky made the following comment after his exceptional tourna­ment victory in Alicante 1978 where he scored 13 points from 13 games: "Chess is a very easy game; all you need to do is calculate lines, and everything will be OK." There is a good deal of truth in this apparently naive statement, as our tactical ability is what enables us to survive the jungle of our beautiful game, and provides a guide in the sea of lines, and supports our reasoning and logic.

Chess is a complex game - while there are many general principles to assist us, there are also many exceptions to them: in one position one principle might work, but in a slightly different posi­tion, other factors might prevail, and only our ability to work out the tactical details will enable us to determine the right path in such cases. From a philosophical perspective, one may conclude that tactical calculations are the one true cornerstone of chess. Therefore it is no wonder that chess en­gines have become so strong. They can calculate millions of chess moves in a second, and they rarely make tactical errors.

What causes tactics to occur?

Two factors are of great importance: energy and time.

An energetic imbalance often enables one of the players to carry out a profitable tactical opera­tion. For instance, overloaded, pinned, and blocked pieces have less mobility, and thus less energy. Their contact with a fully mobile piece may prove lethal for them. On the other hand, more ener­getic pieces can easily deliver double and discovered attacks. They may be used to deflect and de­coy more important and valuable pieces, or be used to disrupt the harmony within the opponent's army by such means as blocking, interference, etc.

Time is the other factor that will prove us right or wrong in a tactical operation. Chessboard op­portunities are fleeting, and we must seize every chance before the opponent is able to secure his position. By striking at the moment when our pieces have more energy, we can either win material (transforming energy into matter) or achieve the highest aim by mating the enemy king. From here the main principle of tactics is seen: with each of our moves we must create a threat. Even 'silent' moves create some threat, even if it is maybe not always obvious.

What does this book aim to do? Our book is separated into two parts. The first one deals in turn with each of the tactical methods that are important in practical chess. We have presented ideas on how to search for each method; in­deed, this was the initial intention of our work. However, a question arises: there are 14 essential tactical methods presented, and will not a large number of principles just confuse the reader? And how exactly will he know which question to ask, and which piece of advice to follow before taking a crucial decision? In a game of chess there is a great deal to think about in addition to possible tac­tical ideas, and if we need to ask all these questions, our work will be too laborious.

This is not what the book is all about. Our aim is to help you develop an understanding of the principles of chess tactics, so that they become instinctive. With some practice, you will start to sense the crucial moments, to feel danger in your position and to smell when something is wrong in your opponent's camp. Inevitably a chess-player learns by trial and error, but it is possible to prog­ress faster and with fewer failures by learning and applying chess principles. Moreover, tackling and solving carefully chosen exercises will help you subconsciously memorize typical patterns.

The first part of the book is written by Dejan Bojkov. I used a lot of personal examples of mine in this material. This is not to show you how good I am, and what an incredible tactician I am sup­posed to be (indeed, some of the examples are painful defeats), but because when discussing what went through a player's mind when making a particular decision, and which variations he foresaw, one can speak with far greater authority when the player concerned is oneself! Joel Lautier stated that we "first calculate during the game, and later cover our tactics with words." This emphasizes the importance of tactics in chess; strategic landmarks are primarily a guide for our tactical work.

The second part of the book is written by both authors. It features the three most common posi­tions of a castled king and various attacking patterns against them, as well as three tactical themes that widely occur in practice. We have sought to discuss these strategic themes in the context of the tactical themes that are most relevant to them.

We hope that our work will help you feel more at home in various tactical situations, and that this will increase the pleasure that you derive from chess.

125 18 The Mystery of the Opposite-Coloured Bishops