The store will not work correctly in the case when cookies are disabled.
Artikelnummer
LMNIMCPQC
Autor
Aaron Nimzowitsch 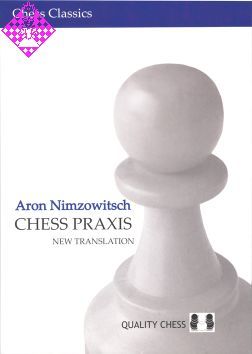 Chess Praxis is a superb collection of Aron Nimzowitsch's best games annotated by the great man himself, but it is even more than that. Nimzowitsch and his hypermodern ideas had a huge influence on modern chess thinking. Nimzowitsch first expounded his views in My System . In his follow-up Chess Praxis he demonstrated and explained how his concepts worked in his own games.

This is a completely new translation of Nimzowitsch's classic work, which will allow the reader to appreciate influential ideas explained in modern language.

Aron Nimzowitsch was one of the greatest chess players of the 1920s and 1930s, ranked just behind the famous World Champions Alekhine and Capablanca. His reputation as an author is higher still.

In publishing a new translation of Chess Praxis our plan is to get closer to the author's original intentions than any previous English version. As with My System previous translations of Chess Praxis from the original German have diluted Nimzowitsch's lively, confrontational style.

We have kept as true to the original language as possible, so you will read of mummification and frog positions: better a moment's confusion than hours of toned-down boredom. Mummification is Nimzowitsch's evocative term for a blocked position with interlocking pawn chains. Nimzowitsch published Chess Praxis six years after the discovery of Tutankhamun's tomb, when interest in all things Egyptian was high. A frog (or crouching) position is a cramped but solid position which has the potential to spring into life.

One of Nimzowitsch's other quirks that we have left "uncorrected" was to vary in the way he referred to his own moves and thoughts. Sometimes "I played", other times "he played"; the royal "we think" and "our theories" are also common. There is an intriguing tendency for Nimzowitsch's bad moves to be mentioned as "he now made a mistake".

There is no doubt that Nimzowitsch is the hero of his own book and the villain is Dr Tarrasch. In the introduction when Nimzowitsch cryptically writes "as out of place as 3...c7-c5" he means after l.d4 d5 2.c4 e6, but can't stomach naming the Tarrasch Defence. Nimzowitsch also mentions that the original publishers refused to include as many diagrams as he wanted. We have granted his wish.

We have also added to his work with a short closing article pointing out some analytical improvement! This is certainly not a comprehensive list of corrections, but rather a selection of positions where we think a fresh insight might interest the reader. These positions have been marked with superscript throughout the book.

The modern master is not secretive. Just like any other branch of art, positional play is founded on technique, and technique can be learned - this is the point of my book and the reason for it.

It sets out to teach positional play: I shall explain lovingly and in depth (by means of articles scattered throughout the book) the stratagems which were hinted at in my maiden work and then they will be illustrated by games. And yet the book is quite independent of My System, since nowhere is it presupposed that the reader has any knowledge of the principles of the said system. Rather, wherever it appears necessary, the latter are - briefly - explained. It is really not very difficult to use words like "prophylaxis", "overprotection", etc. You just have to learn what they mean!

The book is also valuable as a games collection. It contains, apart from those published in My System and in The Blockade and therefore omitted here, 109 of my best games.

And a few words about the lay-out of the book. I have avoided self praise. In fact, I have come to the conclusion that this failing which has its origins in the pseudo-classical period and is still very popular, just as out of place as 3...c7-c5 and other variations which were once much praised. Self praise is admissible only in one case, when due recognition is unjustly withheld. In all other cases, self praise comes over as tasteless and demoralizing.

This time I have provided plenty of indexes. As well as a detailed contents page, there is also an index of games and of openings. When dividing up the material it was impossible to go beyond all-embracing concepts such as "centralization", "restraint" and so on, and so to bring in less general ideas such as "open files", "the seventh rank", etc., I have thought it a good idea to include an index of the "guerrilla" tactics used in the games. It should be obvious that the latter could not be exhaustive; however, if you should wish to, it is possible to look more deeply into those "elements" (the file, the passed pawn, etc.) which might interest you.

And one final point. I should have liked each game to have been provided with four or five diagrams in order to facilitate playing through the often complicated thicket of variations which can arise. But obesity is out of fashion these days - slim is the watchword. In any case there is a simple, tried and trusted method, which can be recommended to all readers: when playing through a game, use two chess sets at the same time (or one and a pocket set); the actual game is kept on one board and the analysis is looked at on the other. It is much simpler than you might think; there is little effort involved and you do not miss the often interesting variations.

With tha t, I think that everything has been said and that the book is ready for the public.

014 1. Neglect of the central square complex as a typical, recurring error (games 1-3)

078 5. From the workshop of the blockade