The store will not work correctly in the case when cookies are disabled.
Artikelnummer
SCOTIVNFO1D4V1
Autor
Sergei Tiwjakow 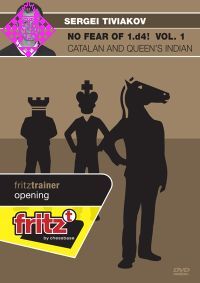 Constancy and a striving for solid positions are what define Sergei Tiviakov's opening repertoire. On his two repertoire DVDs against 1.d4 the top Dutch grandmaster presents to you exactly those variations and ideas with which he himself has been successful in tournament chess for many years. On the two DVDs all important systems which are available to White after 1.d4 Nf6 2.c4 e6 are dealt with in detail. Also, in many areas Tiviakov offers you a choice between alternative variations for Black, between which you can decide according to your temperament. A further highlight of the DVDs is Tiviakov's collection of all the games which he has played during his career with the Catalan, the Queen's Indian and the Nimzo-Indian. Many of these are published on these DVDs for the very first time.

Born in Krasnodar (Soviet Union), Sergei Tiviakov was a member of the Smyslov school and gained the titles of World Youth Champion at U16 and U18 levels. 1994 he represented Russia in the Chess Olympiads. Since 1997 Tiviakov has been living in Groningen (Netherlands). With his new home country he won the title in the European Teams Championships in both 2001 and 2005 and was victorious in the championship of the Netherlands in 2006 and 2007.