The store will not work correctly in the case when cookies are disabled.
Artikelnummer
LOBOSSOOS07
Autor
Jeroen Bosch 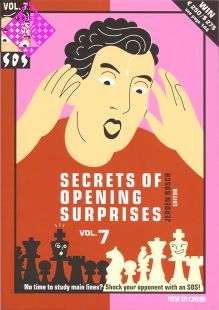 brings you a wide variety of unusual opening ideas. They may seem outrageous at first sight, but have proven to be perfectly playable.

An SOS deviates very early from the regular lines in a mainstream opening, usually even before move six! That is why it is so easy to actually bring the variation on the board. You will baffle your opponent without having studied large quantities of stuffy theory.

050 5 Friso Nijboer The Shirov Gambit versus the Philidor

076 9 Arthur Kogan Inspiration versus the Dragon

"For throwing your opponent off balance, it is hard to beat this series."

"The variations can be exceedingly difficult if you are not prepared."

"The most entertaining of books about openings that I know of (...) I recommend SOS because it is so much fun, to be sure, but also for its practical utility."

"These suggestions are very attractive to club players."

"No matter what you play, you will find something exciting here."

"A refreshing book, full of rare, uncommon but sound ideas that can spice up the opening repertoire of any tournament player."

"Tricky opening ideas, not much to learn, surprise value and lots of fun."