The store will not work correctly in the case when cookies are disabled.
Artikelnummer
LZNICM202008
Autor
Jan TimmanDirk Jan ten Geuzendam 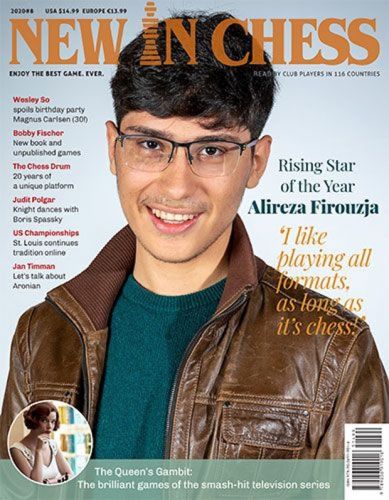 A new exhibition at the World Chess Hall of Fame in St. Louis features artwork by Keith Haring, and newly-commissioned pieces by local artists paying homage to the pop culture icon.

Bruce Pandolfini’s pupil Oliver Boydell wrote a book. At the age of 10!

The enthralling story of Beth Harmon’s stupendous rise in the male-dominated world of chess has stirred a veritable chess boom.

Wesley So spoiled Magnus Carlsen’s party as he beat him on his 30th birthday to win the first leg of the new Champions Chess Tour.

What was it that even Stephen King found ‘utterly thrilling’?

Few doubt that the Iranian-born 17-year-old is World Champion material.

Playing from his home in Minnesota, Wesley So became the 2020 US Champion with a massive 9/11 score.

An excerpt from John Donaldson’s magnum opus Bobby Fischer and His World, including hitherto unpublished games.

For almost twenty years now, The Chess Drum has been focusing on Black chess players and highlighting chess activities within the worldwide African Diaspora.

Petrosian books aplenty! Our book reviewer points out that with his ‘shuffle’ chess the 9th World Champion was way ahead of his time.

The strength of the Catenaccio Bishop.

105 They Are the Champions

Thuso Mosutha is the national champion of Botswana.

Who is the all-time favourite player of Mark ‘The Week in Chess’ Crowther?