The store will not work correctly in the case when cookies are disabled.
Artikelnummer
LXFTACOTNM
Autor
Ljubomir FtácnikDanny KopecWalter Browne

Champions of the New Millennium 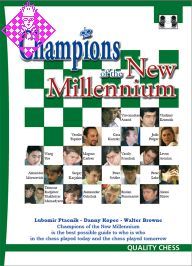 In Champions of the New Millennium three accomplished authors present the eighteen best chess players in the world today. Each player is introduced with an illuminating profile, and then four of his or her finest games are explained in depth.

The players likely to dominate the next decade: Karjakin, Carlsen, Radjabov, Wang Yue, Ponomariov and Grischuk.

Each of the eighteen players is introduced with a readable introduction, some creative made photographs from all stars of the new millennium, plus four deeply analysed games.

The most promising youngsters in chess are at this moment: Karjakin, Carlsen, Radjabov, Wang Yue, Ponomariov and Grischuk.

Included also is the best female chess player of all time Judit Polgar plus the playing comeback man Gata Kamsky.

All together we come on a total of 72 well analysed games where Lubomir Ftacnik is responsible for the games on: Aronian, Kamsky, Ponomariov, Leko, Anand, Wang Yue, Ivanchuk and Mamedyarov.

Danny Kopec: Kramnik, Carlsen, Svidler, Morozevich and half of Polgar.

The book has become a real heavy weight with it's 100 colour photos where many of them have never seen any print before.

Thirty years ago Walter Browne was one of the best players in the world too, see Best games of the young grandmasters by Pritchett & Kopec 1980, so it is very pleasant to see such a creative chess professional as author of this book,on a new generation of champions.

There is a fine index of complete games plus alphabetical index but I am missing a in this book an openings index plus bibliography.

"Then" was smack-dab in the middle of the 20th century, when at age 13 this writer joined the Marshall Chess Club in New York. The great Frank Marshall was gone, and his widow Carrie held sway. There, I was to glimpse my first grandmaster.

It was a simpler world, whose undisputed capital was Moscow, USSR. FIDE had just named the first official grandmasters - numbering a mere 27. None could deny that each of those great players deserved the title. (Who would omit the Austrian-Argentinean Erich Eliskases, conqueror of Capablanca and later, Fischer? And what student today even knows his name?) The acolyte could set out to know the art of each one. If shown a selection of games, one could guess who had played them, from their style of play and opening preferences.

Some of us "adopted" one GM or another, as a model. For example, US Master Abe Turner studied hundreds of games of Salo Flohr, and essayed a technical style of play. Some tried to emulate the dashing verve of a Bronstein, or the positional depth of a Reshevsky.

Today, so watered-down have FIDE's standards become, that we are anticipating the 1000th GM. Whom to study and emulate now? We need guidance as never before.

In all eras, students take their first cue from the world champion. It was the era of Botvinnik the scientist, and I made the mistake of adopting the French Defense before mastering the open game. Later I realized that I should have been studying the great attacker, Paul Keres.

One day while strolling a few blocks east of the club, I discovered member Walter Goldwater's used-book shop, and Voila ! the fascinating world of chess literature.

There was the departed demi-god in whose games I delighted - Alekhine. (Steinitz, Lasker and Capablanca would have to wait.)

Chess literature in English appeared finite. It was not difficult to acquire all the most instructive books. Siegbert Tarrasch, who had taught all Germany, taught me too in The Game of Chess. But I needed the antidote to his dogmatism - Aron Nimzowitsch's My System. Alekhine's My Best Games of Chess set the gold standard for creative excellence, but he was inimitable. Marshall's Swindles were fun. Capablanca's elegant chess seemed deceptively simple. Reuben Fine's Basic Chess Endings was our bible - until its many flaws were uncovered. Modern Chess Openings was the only opening book needed, and periodicals sufficed to keep one abreast of developments. If you were serious, you got them from Russia.

Today, the number of chess books has increased astronomically, spurred by the entry of Britain into the front ranks of chess countries. Instead of one authoritative book on the opening, there are now hundreds devoted to a single defense or variation. Every master seems to think that the world can't wait for yet another exposition of the middlegame, tactics, or strategy - his. Whereas before one could keep up with new books easily, now one cannot even keep up with the reviews. I do not profess to understand today's economics of chess publishing, but surely the poor reader/buyer needs some guidance.

One wanted to know more, to appreciate the essence of all the GMs. There were tournament books, books dedicated to one great player or another, and collections of master games. But a special genre of chess book was needed: selected games elucidating the top individuals of a given era.

Reti's Modern Ideas in Chess from 1922 was a short, lyrical explanation of the great players' ideas. Its descendants include Imre Konig's profound study of opening evolution, Chess from Morphy to Botvinnik (1955) and R. N. Coles' Dynamic Chess, the Modern Style of Aggressive Play (1956).

But the earliest book known to this bibliophile, devoted to characterizing an array of leading players, is Modern Master Play by F. D. Yates & Wm. Winter, in 1929. It covered 21 living players, with one to six games of each, preceded by a brief bio and assessment of style. Reti went deeper with Masters of the Chessboard (1932) with six "older" and 16 "newer" players with one to several games of each, a monument of this genre from the highest of sources.

Savielly Tartakower weighed in with a lighter touch, alas never translated into English, in Führende Meister (1932) with a single game of each of the top 23 players in the world, and Neue Schachsterne (1935), with 30 lesser and younger aspirants. What is special about the latter is the great wit's ability to epitomize each player in a word. Andre Lilienthal was "Optimistic," Mikhail Botvinnik was a "Deep Prospector" and Gideon Stahlberg "Elegant." Stahlberg was inspired to write his own Chess and Chessmasters (1937, updated 1952) the later edition covering 20 stars from Emanuel Lasker to Svetozar Gligoric with penetrating portraits and one to three games each. From far Australia came Lajos Steiner's Kings of the Chessboard 1948, sampling 22 leading players whom he had faced in European events.

Max Euwe, the most prolific author of all world champions and who even rivaled Fred Reinfeld, wrote a book about the eight participants in the great AVRO tournament of 1938, with several games of each, known in English as Meet the Masters (1940). Here he succeeds in epitomizing the kind of position each prefers. Fine: sharp ones. Reshevsky: "boring" ones. Keres: wild ones, etc. Then in The Development of Chess Style (1968) Euwe covers everyone from Greco to Spassky, with a strong emphasis on Steinitz' positional play.

The Soviet School of Chess by Kotov & Yudovich (1951) continued the line, but with a new twist: not only were Soviet players justly proclaimed the world's best, but chess must be shown to further the values of the Soviet State, founded by chess buff V. I. Lenin. For workers, chess promoted literacy (and I would add, kept them from carousing in the streets); for the ruling elite, chess was the premier emblem of a supposedly superior social system. Patriarch Mikhail Chigorin gets his rightful due; but how to deal with the greatest Russian player, Alekhine, who departed Soviet Russia early on and never again deigned to set foot in his native land - even collaborating with the Nazi regime? The authors "discovered" that Alekhine pined for Russia and longed to return. Everyone learned dynamic play from him anyhow. After Stalin's death, the second edition quadrupled the size of the Alekhine section. Dozens of other illustrious players are covered.

In 1972, in conscious emulation of Reti, I made my own entry into the genre with The Battle of Chess Ideas paying homage to the top ten living players, most of whom I had I over the board. I too epitomized, as in "Larsen, the Vitality of Romance." Chess Canada called it "fuel for the soul." The 1994 update, The March of Chess Ideas, added more superstars, the three Ks.

In 1980 our current co-author Danny Kopec, along with Craig Pritchett, weighed in with Best Games of the Young Grandmasters, eight youthful stars, and predicted that one of them, teenager Garry Kasparov, would win the world crown. Another, our co-author Walter Browne, a fellow product of the New York chess maelstrom, would merely win the US title a half-dozen times. When Ray Keene wrote The Young Pretenders (1994) nine completely new stars had vaulted into contention, two of whom, Anand and Kramnik, would become world champions. Paul Motwani's The Most Instructive Games of the Young Grandmasters (1999) had 13 GMs, of whom six were new to the reader, including future world champion Topalov.

Now we are in a new millennium, and no one more than chess fans has reason to rejoice. In the computer era they are presented with an embarrassment of riches. This youth of a half-century ago who naively felt on top of all developments, is now a septuagenarian facing a torrent of information and struggling to know what, and who, is important.

Enter our three authors and Champions of the New Millennium to tell us. Danny Kopec, Walter Browne and Lubomir Ftacnik - two Americans and a Slovak who have collaborated closely as instructors - are uniquely qualified to elucidate their subject. Each brings a wealth of top-level practice, teaching and writing to the task. Browne, whom I have known since my teenage years, would have been a world title candidate had he been under the wing of trainers who could cure him of habitual time pressure. Perfectionism and objectivity are his hallmarks. Ftacnik, also a redoubtable competitor, holds a world record for number of games annotated. No top player is a stranger to him. IM Kopec, a professional educator and author, presides over a popular chess summer camp in which the other two have participated. Thus I look forward keenly to their book as the latest contribution to a venerable tradition. I know that I shall grapple with 18 foremost grandmasters of today, assess their styles of play, look for influences of their predecessors, enjoy their subtleties and brilliancies. If then I wish, I can make odds on the chance of each to reach the very summit. It will be a true pleasure to enjoy the fruits of creativity of both the authors and the players. All chess buffs may luckily join in this pleasure, as chess literature inexorably advances.