The store will not work correctly in the case when cookies are disabled.
Artikelnummer
LXURCCFAN
Autor
Olimpiu G. Urcan 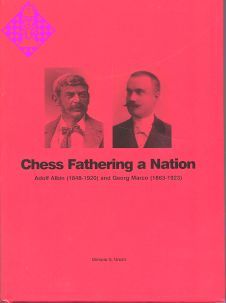 The development of chess in nations throughout the world is a story often told. But a story most often told regarding particular ones, including the Soviet Union, the United States, England, France, and few others. Olimpiu Urcan, the author of this book, has now begun to trace the development of chess through players associated with his native land, Romania. The modern beginnings of that story are set forth here in his study of two long-known but today rarely remembered names: Adolf Albin (1848-1920) and Georg Marco (1863-1923).

Although both Albin and Marco were born in what today is known as Romania, and lived well into the twentieth century, much of their chess careers are associated with nineteenth century Vienna. The two shared seventeenth and eighteenth place at Hastings 1895, with identical scores of 5-9, with 7 draws. Their natures, however, could hardly have been more different, both on and off the board. While Marco is remembered, when he is remembered at all, as being a jocular and pleasant companion, Albin's disappointments in the world of business appears to have left him a dour and caustic personality. Yet both men, although not of the first rank of chess players of the period, were dangerous opponents on any given occasion.

Albin, the elder of the two, at one point came to the United States, where he competed in several events in the 1890s, including both New York 1893 tournaments. In the first he finished second well behind Lasker's perfect 11-0 finish, but ahead of Delmar, Showalter, Pillsbury and Pollock, and in the second he finished fourth, immediately behind Pillsbury, Hodges and Showalter. The following year he finished second, again in New York, behind Steinitz, but ahead of Showalter and Pillsbury. My own introduction to Albin, aside from seeing his portrait in the Hastings 1895 tournament book, was through his play at Buffalo 1894, a small, four man, double round robin affair sponsored by the New York State Chess Association. After managing to drop all three of his games in the first round at Buffalo, Albin calmly returned the favor in the second by soundly beating Showalter and Pillsbury, the first and second place finishers, on successive days.

Marco is best recalled today for his editing and writing in the Wiener Schachzeitung, with which he was involved for nearly twenty years, between 1898 and 1916. He finished fourth at Vienna, 1895-96, behind Weiss, Schlechter and Englisch, although finishing with a very respectable 2 1/2 - 3 1/2 in his six games against the three above him in the standings. Although low in the crosstable at Budapest 1896, Marco defeated Charousek in the fifth round, a defeat that helped lead to the Hungarian's only tying for first place with Chigorin, who eventually won a playoff match against Marco's victim, 3-1. Although Marco finished well down in the crosstables of major events of the period, such as Nurnberg 1896 and Vienna 1898, he would win smaller tournaments in his adopted city, including Vienna 1896 and Vienna 1897-98.

Both men, without question, loved chess. And both men are treated here through details of their careers and the presentation of significant collections of their most interesting games. Lovers of chess history owe Olimpiu Urcan a debt of gratitude for bringing back to life some of the creative chess richness these two men of Romanian birth have given the world.