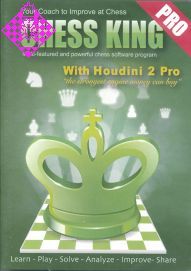 Chess King Pro with Houdini 2 Pro is a new and versatile tool for chess players and is an ideal introduction for the beginner, a challenging opponent for the practiced amateur, and an invaluable coach for the aspiring master.

Chess King Pro emphasizes simplicity of use in training players. However, it is more than just a traditional training program as it includes an extremely strong chess engine and a huge professional database. It is also a convenient tool for analyzing and studying one's opponent before facing them at a tournament.

Buying Chess King is like getting several products and paying only for one, a professional chess software system, the largest game database available GigaKing, the strongest chess engine in the market Houdini with its latest version 2 Pro supporting up to 32 cores, 1500 chess puzzles for all chess levels, a unique random playing mode, and much, much more.

Below is one screenshot, so you can see at a glance what some of its functionalities are: Search huge GigaKing game database Prepare for opponent Analyze game with strongest engine available Huge opening tree and possibility to create tree for opponent Annotate game with variations and arrows and markers Easy export to Blog

Houdini 2 Pro - currently the highest rated chess engine and an excellent choice for analysis. Considering such a strong engine can be frustrating to play against, Houdini 2 Pro includes various kinds of handicaps that can be set up using the Chess King Pro interface. The Pro version of Houdini 2 that comes with Chess King Pro supports up to 32 cores and 32 GB of hash, allowing yo to utilize all resources of modern hardware!

GigaKing Database and Corr 2011 contain over five million chess games. These databases include games from the 16th century up to November of this year. GigaKing contains almost all available master games as well as games from many lesser tournaments, junior events etc. Corr 2011 is a database of correspondence games. The number and quality of the games contained in these databases is on par with those found in the most expensive database packages.

Full opening tree is a statistics database of positions in the GigaKing database. It shows how often a move has been played and the success rate of each move. The opening tree is a useful guide when learning the openings and reviewing your games or a game from the database.

Over one hundred opening positions . You start from very easy starting positions with a large material advantage and by winning enough games you move up to the next level. The catch is that Houdini will be playing against you at full strength! That’s quite a different experience from playing against a chess engine at reduced strength.

Photos of over 1600 chess players . The photos are displayed when you view games played by these players. You can add new photos by clicking the player’s image (or the image placeholder if an image is missing).