The store will not work correctly in the case when cookies are disabled.
Artikelnummer
SCM2021 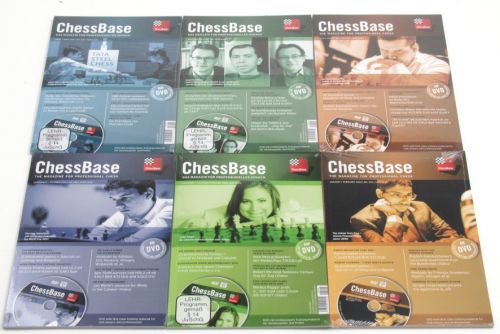 Thorsten Cmiel explains all you need to know in practice

22 games of the Ukrainian star, annotated by CBM authors

All in One: Grand Prix Attack á la Grischuk + The Dubov System

Serve and volley: the Belgrade Gambit

No gap in the Stonewall

Dutch vs. the Reti/English - Victor Moskalenko shows how to deal with White’s setups without d2-d4

A sacrificial attack to remember!

The pawn as universal weapon!

Save the best for last

Bogo-Indian: no respite for Black!

Among other things, the Dutchman annotates his impressive victory over Liren Ding

Frighten your opponent - with the Halloween Gambit!

Reversed Sicilian: d2-d4 in one go!

CBM authors comment on their favorite game played by the 31-year-old Russian. Look forward to an exclusive collection of 21 high-quality games from the period from 2002 to 2021!

FIDE World Cup 2021: Jan-Krzysztof Duda was the only player to remain undefeated. In the semifinals he knocked out the world champion in the tie-break, and in the final he made short work of Karjakin in the second game. In this issue, Adhiban, Krasenkow, Navara, Praggnanandhaa, Vitiugov and Wojtaszek comment on their best games from the World Cup.

More annotated games: Kasimdzhanov analyses his win against Kollars from Dortmund. Plus analyses by Giri, Keymer, Navara and Wojtaszek from the tournaments in Prague, Dortmund and Biel.

Here you can find out everything you need to know about a specific opening line. And that based on just one extensively commented game!

Daniel King takes up a current provocation of the world champion in the Nimzo-Larsen Attack! Mihail Marin explains subtleties of the Richter-Rauzer Variation by means of two current games from the Superbet Tournament. And Jan Werle reveals to you why White is well advised to aim for the endgame from the Catalan Opening.

10 opening articles with lots of exciting ideas for your next games are waiting for you!

Time and again, the Sicilian! Our expert Rainer Knaak presents eight current examples, three of which are also available in video format. The focus is on the different lines of the Sicilian Opening, especially the tempting move Qd8-b6!

"In the style of Adhiban" is the motto of the interactive training session with Robert Ris. The game Adhiban-Delgado from the World Cup is an instructive miniature in which everything revolves around the topics initiative and lead in development.

Mihail Marin works out the playing style of the world champion challenger on the basis of various aspects and comes to surprising insights. Including a detailed video introduction!

When Richard Reti opened the game with 1.Nf3 against Frederick Dewhurst Yates in 1924 and left the center to his opponent, a completely new concept was introduced into the world of chess. Dorian Rogozenco presents the opening classic in video format and explains the typical Reti motifs.

Oliver Reeh's tactics article contains 33 games which include lots of training tasks. Don’t miss the opportunity to solve his three favorite combinations in video format with the IM from Hamburg!

"Nepomniachtchi's Endgames" and much more

The endgame expert Karsten Müller provides one article about the world champion challenger and another one about the highlights from the online tournament Crypto Cup 2021. Plus videos, training exercises and "Readers write".

On the start page of ChessBase Magazine #204 you will find the special recommendations of the editors - the highlights of the issue to click on and enjoy!

CBM authors comment on their favourite games of the great Hungarian. Exclusive collection of 23 wins from 1989 to 2014.

Norway Chess 2021: The runner-up, Alireza Firouzja, comments on two of his winning games, plus analyses by Romain Edouard.

European Individual Championship 2021: The new Champion, Anton Demchenko, analyses his win against Matthias Blübaum. Many other players comment on their best games.

World Cup 2021 revisited: Anish Giri and Peter Heine Nielsen analyse the games of the match for third place between Carlsen and Fedoseev.

Here you can find out everything you need to know about a specific opening line. And all this on the basis of only one extensively annotated game!

In his first video for CBM, Markus Ragger presents an idea of the World Champion in the Sicilian with 3.Bb5+ from the World Cup: 3 ... Nd7 4.d4 cxd4 and now 5.Nxd4!? Nf6 6.0-0!?. Daniel King has identified a new trend in the Exchange Variation of the Queen's Gambit - the trendsetter here is Alireza Firouzja. And Mihail Marin shows Judit Polgar's concept against the Ruy Lopez Breyer Variation from 1993.

CBM #204 offers many exciting ideas for your next games with 11 opening articles:

"A surprising number of Queen's Gambits!" Our expert Rainer Knaak presents ten current traps, three of which are also in video format. This time the focus is on different lines of the Queen's Gambit.

"An absolute master piece!" Recap the brilliant Fedoseev-Carlsen game from the World Cup 2021 move by move together with IM Robert Ris!

Mihail Marin examines the games of the former world-class player with regard to various aspects, from pawn play to positional struggles. Incl. detailed video introduction!

Almost 130 years old and yet absolutely modern! The former coach of the German national team, Dorian Rogozenco, presents the fourth game of the World Championship match from 1892 between Wilhelm Steinitz and Mikhail Chigorin.

Train your eye for spotting mates with Oliver Reeh’s collection of 37 games studded with numerous training questions as well as three interactive videos! And "My Favourites" is best solved together with the International Master in the interactive analysis!

Endgame expert Karsten Müller provides three articles in this issue. In addition to the article on Judit Polgar (incl. video), the GM from Hamburg presents the most beautiful endgames from the Chessable Masters 2021 and deep analyses in "Readers write".

On the front page of ChessBase Magazine #205 you will find the special recommendations of the editors - the highlights of the issue to click on and enjoy!

Analyses from the FIDE Grand Swiss 2021 by the winner Alireza Firouzja as well as from Grigoriy Oparin, Yu Yangyi, Alexandr Predke, Samuel Sevian, Nikita Vitiugov and others. A class of its own: Anish Giri comments on his spectacular Black victory over Abhijeet Gupta from the Chess Super League. Or how about a surprise weapon against the popular London System? Sergey Grigoriants explains the ideas and variations after 6...e5! Don't miss the interactive training sessions with Robert Ris!

CBM authors comment on their favourite games of the former world-class player and candidate finalist. Exclusive collection of 16 games by Robert Huebner from 1970 to 2017.

Here you can learn everything you need to know about a specific game. And all this on the basis of only one extensively annotated game! Spyridon Kapnisis makes you fit for the Sicilian Rossolimo Variation (1.e4 c5 2.Nf3 Nc6 3.Bb5 d6 4.Bxc6+!? bxc6 5.e5!). Igor Stohl presents early bayonet attacks in the Caro-Kann Exchange Variation and the Spanish Opening.

Gruenfeld expert Markus Ragger appoints the new 5...c5 as the main weapon in the variation with 5.Bd2. Rustam Kasimdzhanov reports on his experiment with the French Advance Variation. And Mihail Marin explains the Huebner System of the Nimzo-Indian Defence.

CBM #205 offers many exciting ideas for your next games with 11 opening articles:

"From cool to highly speculative" Our expert Rainer Knaak takes a close look at eight traps from current tournament practice, three of which he also presents in video format. Budapest Gambit, Sicilian, King's Indian and much more.

Let Robert Ris put you to the test. Together with the IM from the Netherlands, replay Nikita Vitiugov's spectacular winning game against Andreikin. Can you find the moves of the new Russian champion?

How can Robert Huebner's style of play best be described? Mihail Marin has analysed many of Huebner's games from the Interzonals and sheds light on various elements of his playing style. The Romanian GM himself is surprised by the results of his analysis!

Dorian Rogozenco presents the game between Botwinnik and the then World Champion Alekhine from the AVRO tournament in 1938. "An impressive game, in one direction from the start"!

Train with Oliver Reeh's collection of 36 games, peppered with lots of training questions and three interactive videos! "My favourites" is best solved together with the International Master in the interactive format with video feedback!

Excelling in endgames: "Endgames by Dr. Robert Huebner" and much more.

Endgame expert Karsten Müller contributes three different articles to this issue. In addition to a selection of Robert Huebner's best endgames (incl. video), the GM from Hamburg presents highlights from the Hou Yifan Challenge 2021 and also deals in detail with letters to the editor.