The store will not work correctly in the case when cookies are disabled.
Artikelnummer
LLALBCCC01
Autor
Lev AlburtRoman Pelts 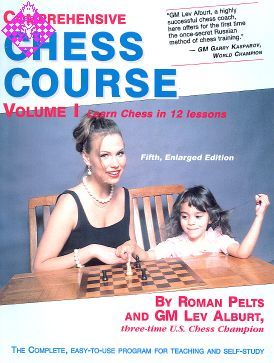 "The work adopts methods of teaching prevalent in the Soviet Union and Europe, and rather badly needed in this country as an alternative to the catch-as-catch-can way of learning that is prevalent here.

Comprehensive Chess Course is a true chess course of the sort that would be formally offered in school. It is designed for a chess coach or teacher. - Harold Dondis, The Boston Globe

"Thanks to Lev's Course, my chess was on the right track from the very beginning." -

"Quite simply, the best and most entertaining introduction to chess ever written!"

VOLUME I: AN INTRODUCTION

Comprehensive Chess Course is primar­ily intended to serve as a manual for those teaching chess in schools and colleges and for parents teaching chess to their children or, for that matter, to themselves. From California to New York, this course has been employed successfully in numerous scholastic programs. Since 1986 and through two editions (plus several printings), thousands of players have purchased this course for self-study. And if letters from our readers are any guide, then thousands have used this course to enter fully the world of chess or to progress from beginner status to advanced levels.

The success of Comprehensive Chess Course has been gratifying to both of the authors, though we must admit not too surprising. At the risk of appearing immodest, we were con­fident that the course would be well-received because of its unique origins and proven record of success in the former Soviet Union.

Soviet chess education owed a lot to the famous Moscow 1925 international, during which Russian scientists tested several of the competitors and published a landmark study, The Psychology of Chess Play. By the late 1920s, chess was being taught to hundreds of thousands of students in the expectation that it would provide them with valuable intellectual training. The instructors of that period - as they do today - conducted chess classes according to an approved program. At the end of each school year, the teachers out in the field would meet in seminars with national-level chess officials to discuss curricular weaknesses.

By the early 1960s an unusually effective program had been honed through the trial and error of decades-long experience. Over a period of four to five years, attentive students could expect to reach the 2200-level with a weekly input of a single two-hour lesson, buttressed by four hours of homework and another two to three hours of practical play. This total of eight to nine hours a week compares favorably with the amount of time that many American players spend pushing wood in their clubs and homes.

Numerous Soviet grandmasters were raised on this course, including Lev Alburt, one of the authors of this volume. Alburt's coach in the former Soviet Union was FM Roman Pelts. When Pelts left the U.S.S.R. several years ago, he smuggled out the course (never published in book form) in small notebooks that he listed as his personal notes.

Comprehensive Chess Course, Volume I (level 1) that the reader holds in his hand, is an updated and improved version of the first portion of the multi-year Soviet course. This portion is designed to bring the reader to approximately Class C strength. Its pedagogical method is to provide the reader only with the knowledge required - no more and no less - to progress from level to level. No other books are necessary to reach the given goals if the material becomes part of the student's active knowledge, which is to say, knowledge that can be readily applied in practical play.

V Volume I: An Introduction

01Lesson 1 The chessboard and the starting position.

How pawns move and capture.

15Lesson 3 How the Rook and Bishop move and capture.

23Lesson 4 How the Queen and Knight move and capture.

31Lesson 5 How the King moves and captures. Check. Checkmate.

57Lesson 9 How games are drawn.