The store will not work correctly in the case when cookies are disabled.
Artikelnummer
LGCHACG
Autor
Chatterjee SangitHuiren Yang 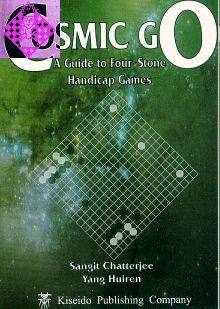 There are few books on Handicap Go that attempt to give recipes for good play. Those that do exist advise simplistic, safe, but slightly ineffective josekis. Cosmic Go takes a different approach. The authors teach you to take the severest path in the opening and play on a large scale. They instruct you to create big open spaces and not worry about territory in the beginning. Handicap books will tell you to create thickness but this book will teach you how, and then use it to construct moyos and pick advantageous fights.

Cosmic Go explores the foundation of two, three, and four stone "star points-in-a-row plays", using examples from professional even encounters and takes its inspiration from Takemiya Masaki's patented cosmic-go style of play. Cosmic Go will show you how to apply these principles to four-stone handicap games. The four joseki chapters, which contain many new josekis, illustrate how to use them in more than 100 full board problems. These deal with a large number of openings and the proper use of josekis covered in the earlier chapters. Tesujis, trick plays, and shapes are treated in depth. A solid understanding of these principles will make winning your four-stone games a snap and you will soon find your handicap stones drifting away like leaves in the autumn breeze!

The Breakdown of the Gates of Heaven

Takemiya Masaki is considered one of the most original go strategists of this century. His cosmic-go philosophy with its center orientation is beautiful to behold - and even relatively inexperienced amateurs can appreciate some aspects of its subtlety and elegance. (Take a peek at the four games we give in Chapter One if you are not already an admirer of the Takemiya style). The former holder of the Meijin, Honinbo and other important titles, he is a class by himself.

You can see Takemiya Sensei, coming to his matches wearing traditional Shinto costume of a haori (a black flowing robe) and a hakami (trousers), with a pair of geta on his feet (traditional Japanese clogs), wearing a giant smile. To him, the go board is a shrine, the place to reflect on both the inside and the outside, the entire cosmos.

As Black, playing only on the star points for his first four moves, Takemiya converts even games into an incredibly thick, center-oriented black board. In the historical context, this type of center orientation can be considered a continuation of the New Fuseki of Go Seigen and Kitani Minoru, where Black plays on two adjacent star points for his first two moves. The two-star opening progressed to 'three star points in a row' (sanren-sei) in the 1950s and continues to-date. The four-star-point opening was popularized by Takemiya. Though three and even four consecutive star point moves have become a standard opening in modern go, it is Takemiya who continues to show incredible ingenuity with this style. This center orientation is Takemiya's patented trademark and fondly called 'Cosmic Go' by his admirers all over the world. The purpose of this book is to focus on this thickness orientation of Takemiya for Black in a four stone handicap game.

To achieve a Takemiya-like orientation, it is important for Black not to be concerned about early profit and be prepared to play broad (three-space high) pincers, which may result in double approaches by White (See Dia. 1 in Chapter 1 for clarification). Faced with counter-pincers, Black often wishes to attach against one of the white stones. To which stone should he attach? We discuss this in Chapter 1 through many examples and show that the ageold principle of attaching on the stronger stone is not universally valid.

Two themes, the Takemiya-like thinking and a thorough understanding of the theory of attachment, form the foundation of this book. In Chapter One, the two themes are explored in depth. Chapters Two, Three, Four, and Five cover the joseki resulting from a three-space high pincer against the knight's approach move (Dia. 1 of Chapter Two). The purpose of choosing this particular joseki only is that in four stone games it should lead to a thickblack game. There are many new josekis here that are not available elsewhere. Chapter Six shows how to apply the material we cover in the early chapters to many four-stones games. When I was about a 3-dan player, I played a series of about 50 games, all with four-stone handicaps, with my co-author, Mr. Huiren Yang. Mr. Yang is a professional Go player from the People's Republic of China; he is now a resident of Boston and the Go Instructor at the Massachusetts Go Club. It is these games that form the basis of the problems that are given in Chapter 6. So all of the problems have arisen in real games. In this chapter we present many josekis that were not covered in the previous chapters.

Who should read this book? Mr. Yang believes that any go player who is less than an amateur 5 dan can gain enormously from this book. But you must study it again and again and apply the principles learned in all your games.

A word about the convention used throughout the book. The word 'Figure' is reserved for professional games, while all other games and analyses are denoted by 'Diagram'.

My fondest hopes are that you will spend some time with each of these chapters and solve the problems many times over. Finally, and most importantly, guide all your games toward a Takemiya-like style. So good luck and enjoy some beautiful sights in the giant cosmos of the go board!