The store will not work correctly in the case when cookies are disabled.
Artikelnummer
SCORISCIQPT
Autor
Robert Ris 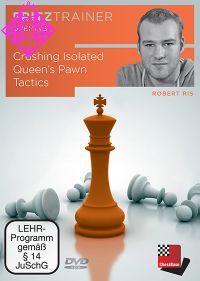 The onus is typically on the player with the Isolated Queen’s Pawn to find dynamic resources that compensate their structural weakness. The aim of this DVD is to offer the viewer tactical exercises that also illustrate the attacking prospects within IQP positions, and as the ensuing positions can arise from so many different openings, the content of the DVD emphasizes the importance of understanding this type of pawn structure. To this end, well-known masterpieces like Steinitz-Von Bardeleben, Hastings 1895 and Kamsky-Short, Linares (Candidates) 1994 are covered in depth to better acquaint you with the typical plans of the attacking side, but of course less well-known games have been included as well. In an attempt to keep things as clear as possible, all the exercises are presented from White’s perspective, but that doesn’t mean that these types of positions can’t be obtained with reversed colours. The Quiz Questions are not grouped according to particular themes, leaving the viewer to make a conscious effort to choose between several plans: Should I play a rook lift to the 3rd rank to increase the pressure, play for the central thrust d4-d5 or deploy an immediate sacrifice within striking distance of the Black king?

Born in 1988, Robert Ris is an International Master who has represented The Netherlands in various international youth events. Nowadays his main activities in the Amsterdam area consist of teaching in schools and chess clubs as well as coaching private clients. On top of that, he is also an active online trainer with a number of students from a host of different countries. Robert has made several appearances as a live commentator for prestigious events, such as the Dutch National Championships 2011-2013 and the Tata Steel Chess Tournament in 2013 and 2014.