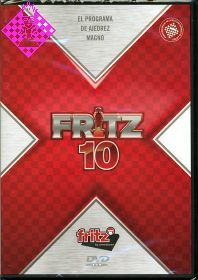 You are holding in your hands a copy of Fritz, the program that for many years now has fascinated the chess world. Whether it was the match against World Champion Vladimir Kramnik in Bahrain in 2002, or against Garry Kasparov in New York in 2003, or the revenge match against World Champion Kramnik in the National Art Gallery in Bonn, Germany, in 2006 - the pitting of wits of the strongest players on the planet against the world’s finest chess playing program has generated unprecedented media attention and fired the imagination of people from all walks of life. “Man vs Machine” has become one of the great themes of our time.

But don’t be afraid - Fritz has a different side to its personality. The program will help you along during the game, with numerous sophisticated coaching functions, adjusting its playing strength to exactly match that of any opponent. It graphically displays threats and plans, and provides full opening statistics. For beginners Fritz will explains moves and positions, or warn you of dangers and of errors you are committing. It has instructive training modules and amusing handicap levels. For club and tournament players Fritz has long become a trusted friend and indispensable advisor, helping them to study their games and find new opening ideas for their next tournaments. A database with more than a million games provides the basis for state-of-the-art analysis. Even Garry Kasparov has used Fritz on a regular basis.

How often have you attended personal grandmaster lectures or training sessions? With its Chess Media System Fritz brings the world’s greatest chess players into your living room, in full high resolution video and sound and a synchronised graphic chessboard. Listen to Garry Kasparov, Viktor Korchnoi, Alexei Shirov or (former world champion) Rustam Kasimdzhanov while they explain important openings and ideas that lead to success. A host of famous chess teacher provide instruction in more mundane subjects, like opening traps, middlegame strategy, or endgame skills. For those of you who have never played chess before there are elementary courses to teach you the basics in a matter of hours. Fritz has a variety of beautiful photo realistic 3D chessboards, and can provide amusing verbal comments during the game.

Fritz makes it easy for you to play against other human beings, at any time, day or night. It provides you with a one-click connection to the largest chess community in the world, Playchess.com, which has over 200,000 members. You can play quick and informal games at any level, take part in tournaments, or attend live lectures and training sessions. You can also watch great international events, which are broadcast live on the server, and you can discuss the moves with players and grandmasters from all over the world. It is an experience you will not want to miss.

Fritz 10 is a 32-bit software. Due to the manufacturer's information it runs also under 64-bit systems like Windows x64 - naturally without using the full potential of such a system.