The store will not work correctly in the case when cookies are disabled.
Artikelnummer
SCOPRUSTS2
Autor
Roeland PruijssersNico Zwirs

How to Slay the Sicilian Vol. 2 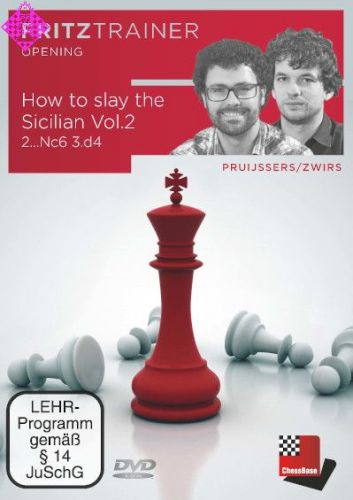 Do you struggle against the Sicilian? And would you like to play the Open Sicilian but shy away from it because you fear the many lines you might have to learn? Then this video is a must for you! Dutch Grandmaster Roeland Pruijssers and International Master Nico Zwirs created a complete repertoire against the Sicilian that is based on the Open Sicilian and that is easy to learn. They recommend the Maroczy set-up (e4-c4), the English Attack (Be3,f3 and Qd2) and set-ups with Be3/Qf3. Fighting the Sicilian with one of these three setups makes the Open Sicilian much more easy to play. Sometimes this opening approach will lead to transpositions that will baffle players with Black, e.g. if they wanted to play the Najdorf but suddenly find themselves in a line of the Taimanov!

This video offers a strong and safe repertoire against the Sicilian and comes with a lot of new and fresh ideas. It is ideal for club players and titled players alike! The whole series is divided in three parts that deal with 2 ... d6, 2 ... e6 and 2 ... Nc6 respectively. The entertaining presentation of Pruijssers and Zwirs help to understand this powerful recipe against one of the most popular openings against 1.e4. Watch the video and get ready to slay the Sicilian!