The store will not work correctly in the case when cookies are disabled.
Artikelnummer
SROMARKIAEE
Autor
Andrew Martin 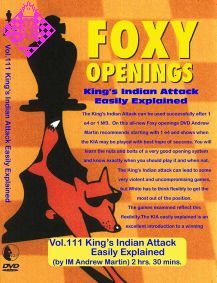 The King's Indian Attack can be used successfully after 1 e4 or 1 Nf3. On this all-new Foxy openings DVD Andrew Martin recommends starting with 1 e4 and shows when the KIA may be played with best hope of success. You will learn the nuts and bolts of a very good opening system and know exactly when you should play it and when not.

The King's Indian attack can lead to some very violent and uncompromising games, but White has to think flexibly to get the most out of the position. The games examined reflect this flexibilty.

The KIA easily explained is an excellent introduction to a winning opening system.

It is rather difficult not to heap praise upon the man who is undoubted the best chess instructor of our time. He has coached many individuals who have gone on to become British champions as well as teaching in numerous schools and colleges in Great Britain. He is intellectual, articulate, metaphorical, entertaining and embodies all of the assets that make a great teacher. More than that, he is a hard worker who has written several books, created numerous DVDs and used any and every media to teach the subject that has become one of the most important things in his life. He has been an International Master since 1984 at the age of 27. In his over the board play he seems to favor the King's Indian with rather good results. This is perhaps why the current DVD which is a King's Indian with an extra tempo is particularly well suited to him. I can think of no one better to create this DVD. It is not only entertaining but also contains a wealth of information for the potential player of the KIA system.

He has chosen games which he feels best exemplify the numerous possibilities in this opening system. They include games of Botvinnik and Fischer as well as those of current players and the DVD contains games from 2009 as well as the 1960's. I rely on his choice of games without reservation.

I have a confession to make. Whenever I go to a new chess club and I am a bit nervous with the white pieces I revert to old faithful 'The King's Indian Attack'. I know the moves against both French and Sicilian defenses and I go into automatic pilot. My record is fairly good so I was looking forward to Foxy 111 'The King's Indian Attack Easily Explained' by Andrew Martin. Martin has made an uncountable number of DVDs and they have maintained the highest standard of quality. Well, some are better than others but they are all head and shoulders above his nearest competition. I have been put to sleep by several of the DVDs produced by another company which feature Grand Masters who are better suited to the chess board than a camera. They should leave the DVDs to teachers like Andrew Martin who excel at this task. They may play better chess but they sure can't teach.

In this two and a half hour DVD Martin recommends this white attack against both the French and the Sicilian and provides and analyzes the best games he could find to reinforce his belief. We are treated to the likes of Fischer, Botvinnik and Uhlmann to prove the validity of this opening system for white. The fireworks begin in the very first game between Robert James Fischer and Lhamsuren Myagmarsuren. A game that has been referred to as “A Night in Tunisia”. The game begins with the normal King's Indian Attack opening moves against the French defense.

However, this game contained one of the most famous combinations in the annals of chess history. Here is the position in which Fischer begins his mortal and immortal combination.

A perfect ending to a wonderful game. All in all there are a total of 14 games that are annotated with exceptional brilliance by Andrew Martin. While there may be an over abundance of French responses we have plenty of time for the Sicilian as well as a King's Indian Attack played with the Black pieces in a game by Fischer against Nikolic. Nothing is left for the viewer but to sit back and learn how best to play this opening system.

Martin emphasizes that you should not play this system like an automaton and many times the moves and move orders must be varied to meet different circumstances. Martin does his best to try and teach you how to think while playing this opening system and to forget about going on 'automatic pilot' as this will be sure to lead to a loss. The DVD does include a Caro-Kann that was the only loss to the King's Indian attack. This belief that the KIA is not the right system for the Caro-Kann might be controversial. But it should be factored in to your opponent's 1 ... c6.

While there are several books on the King's Indian Attack, as far as I know this is the first DVD on the opening system. We should all be glad that it is Andrew Martin who paved the way for what I am sure will be several more. To sum up. If you are at all curious about the King's Indian Attack than go out and buy this Foxy DVD. Martin is the best chess teacher on the planet and it is a pleasure to learn from his wealth of knowledge.