The store will not work correctly in the case when cookies are disabled.
Artikelnummer
LXFIEOUD2008
Autor
Harald FietzJosip AsikAnna Burtasova 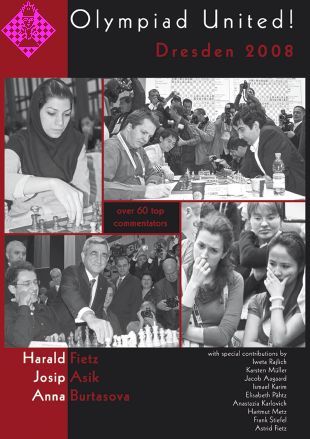 The Chess Olympiad held in Dresden 2008 was a spectacular gathering of the world's chess nations - with a line-up of 1270 registered players representing 146 teams in the 'open' tournament and 111 teams in the women's event. Fighting for the honour of their respective countries as well as for their own personal reputations, competitors from all over the globe were more determined than ever to play the best chess of their lives.

This book not only presents the most interesting games and other chess highlights of the 38 th Chess Olympiad but also includes interviews and behind-the-scenes chat from players, coaches and observers alike. Among the contributors to this souvenir volume are those who had themselves been playing for gold medals on the stage in front of large crowds of spectators and others who could be proud of their individual achievements or whose teams performed above expectations.These players not only comment on the action at the board but also reveal their private pre-match preparation and post-mortem analysis.

In Dresden, there were winners and losers, joy and heartbreak - and no shortage of excitement and drama. But every participant from every country, large or small, as well as presidents, officials, organisers, arbiters, captains, volunteers, journalists, photographers and sponsors could not help but experience that same feeling of Olympiad United! So here, for your entertainment and instruction, over 60 chess experts from 31 countries tell the Dresden story as it has never been told before, and further illustrate the Olympic zeal in the form of over 100 annotated games and over 300 atmospheric classic black and white photographs.

022 Round 2 open section: First zero-rule forfeit given on a day when the Olympiad starts 1 hour late!

028 Does the ‘Revolution of Rules’ rule rationally? Intentions, incidents and impacts from the labyrinth of chess laws (Harald Fietz / Anna Burtasova)

034 Round 3 open section: Team bashing is the order of the day

038 Round 3 women’s section: A long day for the Russian women

049 Loud talking and behind the scenes activity by FIDE! (Harald Fietz)

058 Round 6 open section: Russia and Armenia emerge as leading duo

079 Round 7 women’s section: First individual loss by a Chinese player

108 Round 10 open section: Another change at the top

114 Round 10 women’s section: Suddenly the Polish ladies lay claim to the title

118 Round 11 open section: Armenia’s men see it through against China

129 Round 11 women’s section: Out of the blue Georgia win on tie-break

143 Guess what they did at the Olympiad? (A gallery)

144 Fans were the winners (Harald Fietz)

150 Chess is the No. 1 sport in Armenia – The Olympiad’s best player speaks out Anna Burtasova in conversation with Gabriel Sargissian

152 Winner missed her way home! Sopiko Khukhashvili was moving pieces in Serbia while her team celebrated in Georgia (Josip Asik)

156 Missed endgame opportunities – Is the conduct of the final phase of the game increasingly turning into a lottery? (Jacob Aagaard)

TEAM SPIRIT IN DRESDEN 190 Searching for team spirit – What helps or harms a team? (Harald Fietz)

202 Runner up on board points! But Canada finished in 28th place (Igor Zugic / Josip Asik)

207 My memories of the Dresden Olympiad (Dr. Dirk Jordan)

208 We were happy to be together! Some secrets from my Turkish team (Mert Erdogdu / Anna Burtasova)

224 A gallery of team spirit

228 A gallery of dress code

264 Simply a phenomenon! A view from the Korchnoi generation (Borislav Ivkov)

267 Helpless at move one! The new ‘boss’ of Viktor Korchnoi Anna Burtasova in conversation with Artur Yusupov

BACK HOME AFTER THE DRESDEN OLYMPIAD 271 Was it in Hawaii? ... No it was in Dresden (Klaus-Jörg Lais)

272 Pinwall: My most exciting memory from Dresden was...

291 The art of chess diplomacy or executing the first move

299 Chess in words and pictures – authors and photographers