The store will not work correctly in the case when cookies are disabled.
Artikelnummer
SRODZIPKTFT1E4P
Autor
Roman Dzindzichashvili 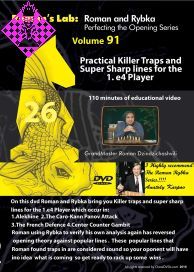 On this dvd Roman and Rybka bring you Killer traps and super sharp lines for the 1.e4 Player which occur in:

Roman using Rybka to verify his own analysis again has reversed opening theory against popular lines. These popular lines that Roman found traps in are considered sound so your opponent will have no idea what is coming so get ready to rack up some quick wins.