The store will not work correctly in the case when cookies are disabled.
Artikelnummer
LXFIAQFCH199901
Autor
Vlastimil Fiala 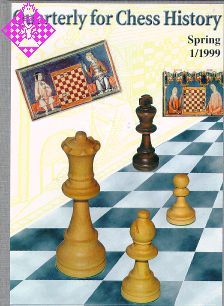 005 H.N. Pillsbury's Simultaneous Tour of the United Kingdom in 1902

There are niches in the chess world the regular club player is not likely to discover. Correspondence and computer chess are probably best known in this category, another one is the composition of problems or endgame studies. These hobbies tend to be pursued in special clubs. One such circle is the international club for chess collectors. Its members may collect anything connected with chess: books, of course, but also sets in all kinds and formats, stamps, first-day covers, postcards, and what have you. This circle originated from a group around Egbert Meissenburg, whose primary interest lies in chess history. Yury Averbakh, Ken Whyld, Jan Kalendovsky and Rob Verhoeven, the former librarian of the Royal Dutch Library in The Hague, are other prominent members.

Doctor Vlastimil Fiala, founder father of the ever-active publishing house Moravian Chess in Olomuc, has now initiated a quarterly publication entirely dedicated to the history of chess and historical research on chess. The Quarterly is a successor to the magazine Czechoslovak Chess Bulletin, puplished in Czech from 1991. The wide range of subjects covered in the first issue includes over 30 pages on Pillsbury's Simultaneous Tour of the United Kingdom in 1902, over 60 pages about Nice 1930 (a forgotten tournament, won by Savielly Tartakower) and a report of a four-game match between Alekhine and the Puerto Rico champion Rafael Cintrón. Chess Miscellany is an Edward Winter-like mixed assortment of historical information, forgotten games (including one by the late Yehudi Menuhin taken from El Espanol, December 16, 1944) and other tidbits.

If your appetite is whetted, reading Fiala's introduction to the basic principles of chess research may be your first step towards a new hobby.

The Quarterly's Supplement contains no fewer than 271 games of Rudolf (Reszö) Charousek (1873 - 1900), all arranged in chronological order. Historians will immediately compare this selection with the 250 games offered by Charushin's biography Chess Comet Charousek.

"Christmas has come early for chess historians / this quaint hardcover labour of love by Dr Fiala, Czech publisher, editor and distributor, is packed with original research. It kicks off with a 31/page feature on Pillsbury's 1902 simultaneous tour of Great Britain, followed by biographical pieces on Rudolf Spielmann, Paul Saladin Leonhardt and Richard Teichmann. The main feauture is in ""forgotten"" tournaments, and stars a lengthly annotated report of Nice 1930 (won by Tartakower). There follows a fascinating account of a little known Alekhine visit and match in San Juan 1933. Whilst the quality of the written English is wildly variable throughout, the prose remains remarkably eloquent one can easily forgive a few creative spellings to an author whose passion for chess research shines on every page. It is hard to believe that such scholarely material can be amassed on a quarterly basis in future, as optimistically promised, but this initial volume is a treasure trove to savour"" (Reviewed by BCM, September 1999) 312 pages"