The store will not work correctly in the case when cookies are disabled.
Artikelnummer
LXFIAQFCH199902
Autor
Vlastimil Fiala 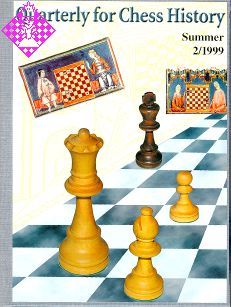 163 Chess in Philadelphia I (by John Hilbert)

This is the second edition of the new chess historical journal and, like the first, filled with the fascinating results of Vlastimil Fiala's original and scholarly research. As hinted in the earlier review, the proposed interval for publication has proved optimistic, but this has been largely as the result of the monumental amounts of material made available. Given the huge overall number of pages, the editor can afford to give over vast amounts of space to each of his subjects.Capablanca's simultaneous tour of the UK in 1919/20 is spread over 159 pages, and a full report of the 26-round Monte Carlo tournament of 1903 (where Colonel Moreau scored his famous 0/26) runs to 161 pages. There are 325 Max Euwe games from the period 1911-22. The book also contains biographies of Alapin, von Bardeleben andMieses, thee Marshall maches from 1902, in-depth book reviews, an article by Ken Whyld on rediscovered Lasker games, and John Hilbert on chess in Philadelphia. A must for the chess historian.(Reviewed by BCM) 536 pages