The store will not work correctly in the case when cookies are disabled.
Artikelnummer
LXSOL100BGK
Autor
Andrew Soltis

The 100 Best Chess Games of the 20th Century, Rank 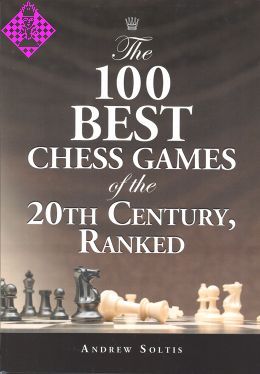 How does one determine the "best" chess games? What one may see as brilliant, another may see as simply necessary. Soltis uses five criteria: aesthetics (clever and relentless are insufficient qualities); originality (not yet another white knight sacrifice in a Sicilian); level of opposition (the loser must have played very well); soundness, accuracy and difficulty (are the moves refutable? are very few second-best? did the winner overcome major obstacles?); and breadth and depth (one wants a series of sparkling ideas, with no dry patches).

Soltis' hundred best were taken from about 7,000 played from 1900 through 1999 that had already gained attention in books and periodicals. No attempt was made to balance the selection according to period, nationality of players or opening. Includes 335 diagrams, a bibliography, and four indexes.

Grandmaster ANDREW SOLTIS is the author of dozens of chess books, including (from McFarland) Chess Lists (2d ed., 2002), Soviet Chess 1917-1991 (2000 U.S. Chess Federation Historical Book of the Year), The United States Chess Championship (with Gene H. McCormick, 1997), and Frank Marshall (1994 British Chess Federation Book of the Year). Eight-time champion of the world-famous Marshall Chess Club, he is an editor and journalist at the New York Post and a columnist for Chess Life. He lives in New York City.

015 The Most Overrated Games