The store will not work correctly in the case when cookies are disabled.
Artikelnummer
LOWILTIE
Autor
Simon WilliamsRichard Palliser 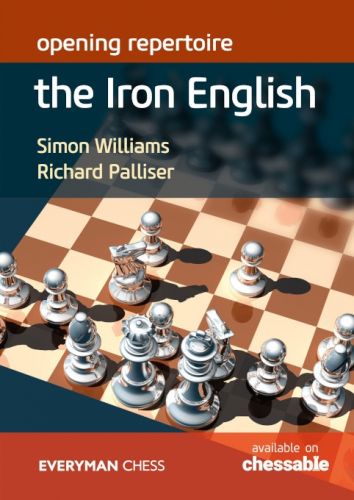 Grandmaster Simon Williams was taught the English Opening at the age of six and 1 c4 was his weapon of choice until long after he became an International Master. For this new work, he teamed up with acclaimed theoretician International Master Richard Palliser to explore his old favourite.

1 c4 remains an excellent choice for the club and tournament player. This book focuses on the set-up popularised by the sixth world champion, Mikhail Botvinnik, the so-called Botvinnik formation with 2 Nc3, 3 g3, 4 Bg2, 5 e4 and 6 Nge2. This system is compact but still aggressive and rewards an understanding of plans and strategies rather than rote memorisation of moves.

In Opening Repertoire: The Iron English leading chess authors Simon Williams and Richard Palliser guide the reader through the complexities of this dynamic variation and carves out a repertoire for White. They examine all aspects of this highly complex opening and provide the reader with well-researched, fresh, and innovative analysis. Each annotated game has valuable lessons on how to play the opening and contains instructive commentary on typical middlegame plans.

Simon Williams is a Grandmaster, a presenter and a popular writer whose previous books have received great praise. He is much admired for his dynamic and spontaneous attacking style.

Richard Palliser is an International Master and the editor of CHESS Magazine. In 2006 he became Joint British Rapidplay Champion and in 2019 he finished third in the British Championship. He has established a reputation as a skilled chess writer and written many works for Everyman, including the bestselling The Complete Chess Workout .

050 2) Kickstarter: An Outline of the Iron English Repertoire