The store will not work correctly in the case when cookies are disabled.
Artikelnummer
LGSAKTMGOG01
Autor
Eio Sakata 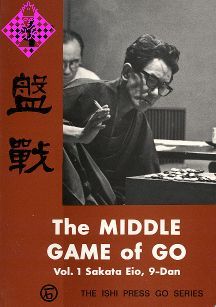 In the opening stages of a game of Go, the standardized opening procedures known as joseki play a very important role. Thus, one can become quite proficient in the early stages, fuseki, simply by memorizing a hundred or so joseki and combining this with a knowledge of the few basic principles of fuseki. However, mastering the middle game is not so easy.

In the middle game, almost all games generate their own unique positions and the players are left to their own devices to work out the best move. It is quite common to find a player who is extremely strong in the fuseki but falls apart in the middle game. At the same time, a player who has developed a superior fighting sense can easily make up in the chubansen those losses he suffered in the fuseki. To be sure there are certain 'middle game joseki' that can be systematically applied to great advantage, and in fact a large portion of the first two chapters is devoted to an analysis of some of them, but these usually occur early on in the game and are not at all decisive.

A player about to embark on a study of the middle game is faced with the problem of how to start. Some sort of systematic approach is needed. My own method is to divide the study into three parts. These are the strategic concepts, timing and reading. What I mean by strategic concepts includes the ideas of aji, kikashi, sabaki, yosu mini, miai and furikawari (these terms are defined in the glossary at the end of this book). Some of these concepts were briefly touched on in the introduction of Basic Techniques of Go and a more detailed study will form the subject of the forthcoming book entitled appropriately Strategic Concepts of Go . Secondly, there is timing; for example, when and how to utilize aji; when to play kikashi, sabaki, yosumiru, etc., Lastly, we have yomi (reading). This means the accurate analysis of all the possible variations that can develop from a situation and must be made before the next move is played. Included in this category are the study of tesuji, shinogi, damezumari, etc. Perhaps the only way to perfect one's yomi is to solve large numbers of tesuji and tsume-go problems and combine this with constant practice in one's own games.

Clearly these three categories are interrelated and it is the purpose of this book to illustrate this interrelation by using examples of games played by some of the strongest players in the world. It is essential for any player who wishes to improve his strength to study professional games like these but while game records are readily available, the actual percentage of the moves that an average amateur can fully understand is very small indeed. Accordingly, the explanations accompanying these games are extremely thorough, leaving no part of the game untouched.

The games in this book continue from the point where Modern Joseki and Fuseki left off and although they can be read independently, this work is intended to be a companion to that two-volume book. The fuseki portions of the four games studied in this book were analyzed in detail there. Many of the other games in Modern Joseki and Fuseki will appear in subsequent volumes of this series but these future books will not be limited to only those games. In addition, it is planned to extend the series to cover games by other great modern master players, such as Kitani, Go Seigen, Takagawa, Iwamoto, Hashimoto Utaro, Fujisawa Shuko, Rin Kaiho and so on.

At this point, I would like to take the opportunity to express my sincere gratitude to those people who helped in preparing this book. In particular, Mr. John Power of the University of Sydney for translating the first and second chapters, Mr. Kohei Yoshida, editor of GO Review, who translated the third chapter and Mr. Stuart Dowsey of The Ishi Press for translating the fourth chapter. Finally, I remain immeasurably indebted to the Japan Go Association, whose help and encouragement have made all these books possible.

001 CHAPTER 1: The Long and Winding Road