The store will not work correctly in the case when cookies are disabled.
Artikelnummer
LOKOVTMMB
Autor
Alexey Kovalchuk 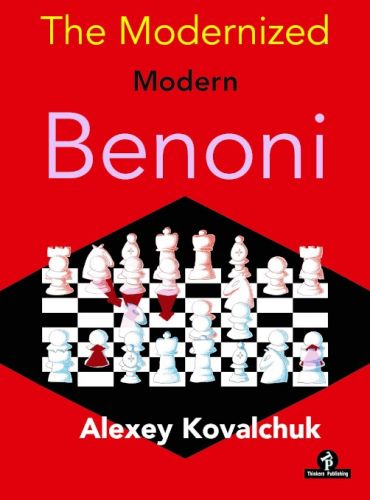 The Modern Benoni is one of the most controversial but also dynamic answers to 1.d4.

This opening remained the favorite of famous attacking players as Tal, Kasparov, Gashimov and Topalov.

From the outset, Black creates a new pawn structure and deploying his active piece play against White’s central majority.

In his book, Alexey Kovalchuk focuses on a set of new ideas and deep analyses supported by his silicon friends. His book supplies all Black needs to know to fight for the initiative from move two!

Alexey Kovalchuk was born in Russia in 1994 and learned to play chess at the “late” age of 12. In November of 2017 he reached his highest Elo yet of 2445 and is considered an IM without the norms. Alexey has never had a coach having studied with the aid of books and other materials.

His tournament successes include winning the Rostov Championship in both classical and rapid. He is a three-time winner of the Taganrog Championship and has won prizes in many events including Taganrog, Togliatti, Astrakhan, Lipetsk, Kharkov and Donetsk.

His reputation as a theoretician is well known and he has previously published a book on the Grunfeld Defense.

Currently Alexey serves as a second for several grandmasters as well as coach for several aspiring students.