The store will not work correctly in the case when cookies are disabled.
Artikelnummer
SROHENTNR3
Autor
Ron Henley 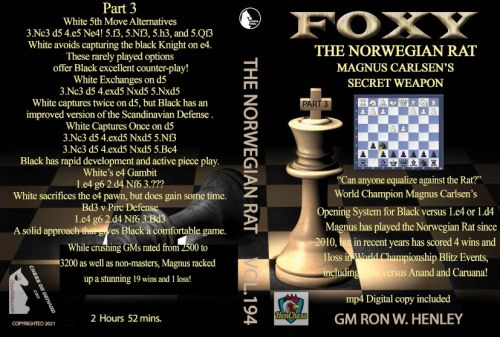 Opening System for Black versus 1.e4 or 1.d4

Magnus has played the Norwegian Rat since 2010, but in recent years has scored 4 wins and 1loss in World Championship Blitz Events, including wins versus Anand and Caruana!

In the last two years, he began employing the Norwegian Rat in his 13 part Chess24.com Banter Blitz series while taunting his opponents “Can anyone equalize against the Rat?” While crushing GMs rated from 2500 to 3200 as well as non-masters, Magnus racked up a stunning 19 wins and 1 loss!

White captures twice on d5, but Black has an improved version

of the Scandinavian Defense which Magnus quite likes.

White Captures Once on d5

White sacrifices the e4 pawn, but does gain some time.

A solid approach that gives Black a comfortable game