The store will not work correctly in the case when cookies are disabled.
Artikelnummer
SCOWELSVE
Autor
Loek van Wely

The Sveshnikov Variation of the Sicilian 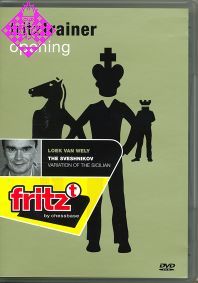 Born in 1972, Loek van Wely learned chess at the age of 4 and was soon recognized as one of the greatest talents in the Netherlands ever. After becoming Grandmaster in 1993, he steadily climbed up the Elo ladder to reach a peak of 2714 and a place among the top ten in the world in 2001. From the years 2000 to 2005, 'King Loek' won the Dutch national championship six time in a row. His reputation as an uncompromising fighter with a merciless will to win make him a most welcome guest in tournaments all over the world.. Among van Wely's greatest successes are his triumphs at the Berlin Open in 1991, the World Open in Philadelphia in 1992 and the New York Open in 1995. In 2005, he was the top board of the victorious

Dutch team at the European team championship in Gothenburg.

LOEK VAN WELY: THE SVESHNIKOV VARIATION OF THE SICILIAN

In this Latest Fritz trainer openings DVD van Wely concentrates on his pet line the Sveshnikov defence {1.e4 c5 2.Nf3 Nc6 3. d4 cxd4 4.Nxd4 Nf6 5.Nc3 e5 also known as the Lasker Pelikan or Cheliabinsk Variation} where the six time Dutch champion handles with black twelve of his most amazing Sveshnikov games! As for example I found between the list of twelve his game against the world champion Kramnik played at Wijk aan Zee 2005,where you willl find his interesting move 19 ... b4!? which was that time an interesting recommendation of ChessBase Magazine issue 113. Please also see also the latest 2007 MegaDatabase, where you can find a fine analyse from this game, done by the great Sveshnikov expert Dorian Rogozenko. It is interesting to mention that Van Wely handles also a lot of interesting analyses and exciting notes between the lines of the reference games, where for example I found the older subline that once was favoured by John Nunn: 1.e4 c5 2.Nf3 Nc6 3.d4 cxd4 4.Nxd4 Nf6 5.Nc3 e5 6.Ndb5 d6 7.Bg5 a6 8.Na3 b5 9.Bxf6 gxf6 10.Nd5 f5 11.c3 Bg7 12.Bd3 Be6 13.Qh5 0-0 14.exf5 Bxd5 15.f6 e4 16.fxg7 Re8 17.Be2 Re5 18.Qh6 b4 19.Nc2 bxc3 20.bxc3 Qg5 21.Qxg5 Rxg5 22.0-0 Be6 23.Rfd1 Rc5 24.Rxd6 Rxc3 25.Ne3 Nb4 26.a4 Nc2 27.Nxc2 which Van Wely faced without any problems against Anand, Wijk aan Zee 2003. Van Wely knows a terrible lot about the Sveshnikov and this DVD is an unique opportunity to get in touch with top level Sveshnikov chess! Conclusion: A must for every Sveshnikov fan!