The store will not work correctly in the case when cookies are disabled.
Artikelnummer
SRODZIWTPATNS
Autor
Roman Dzindzichashvili

White to Play Against the Najdorf Sicilian 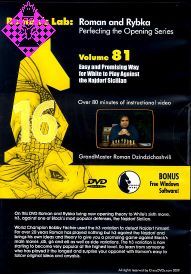 On this DVD Roman and Rybka bring new opening theory to White's sixth move, h3, against one of Black's most popular defenses, the Najdorf Sicilian.

World Champion Bobby Fischer used the h3 variation to defeat Najdorf himself. For over 20 years Roman has played nothing but h3 against the Najdorf and brings his own ideas and theory to give you a promising game against Black's main moves d5, g6 and e5 as well as side variations. The h3 variation is now starting to become very popular at the highest level. So learn from someone who has played it the longest and surprise your opponent with Roman's easy to follow original ideas and analysis.