The store will not work correctly in the case when cookies are disabled.
Artikelnummer
SRODZIWWNALAHPO
Autor
Roman Dzindzichashvili 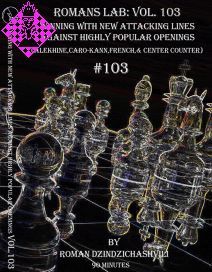 With the help of Rybka Roman has given the edge back to white in all these openings and created a whole new opening Gambit in the center counter. Roman created a new way to play against the Center Counter by giving up a pawn early in the game with leads to extra time and space for White. Romans understands black has already made 3 Queen moves and by giving up a pawn causes black to fall even further behind in developement a great concept that works well since making 5-6 Queen moves for Black cannot be good. Rybka at first did not like Romans gambit idea however it did not take long before Rybka was giving white a plus score.

Roman does equally well with his ideas in the French, Alekhine and Caro-kann.

Stop wasting time seaching everywhere for openning winning lines they are all on this dvd.