The store will not work correctly in the case when cookies are disabled.
Article Number
SRODZIRFWW1D4
Author
Roman Dzindzichashvili 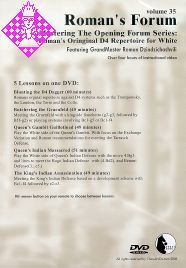 5 Lessons on one DVD:

Romans original repertoire against D4 systems such as the Trompowsky, the London, the Torre and the Colle.

Play the White side of the Queen's Gambit. With focus on the Exchange Variation and Roman recommendations for meeting the Tarrasch Defense.

Meeting the King's Indian Defense based on a development scheme with Bc1-f4 followed by e2-e3.