The store will not work correctly in the case when cookies are disabled.
Article Number
LXKRA600MCP
Author
Martin Kravtsiv 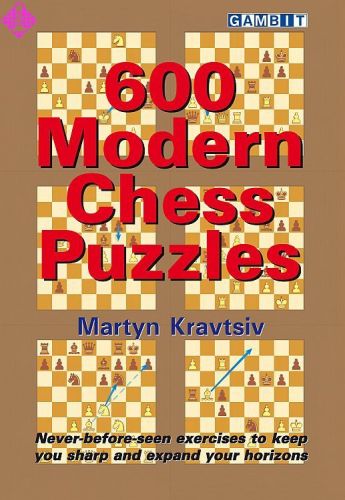 “The easiest, quickest and most effective way to improve your overall game is to increase your tactical vision. Many good positions are lost because a key moment is passed by and a player misses the opportunity to win by a beautiful combination. This book is designed simply to help you improve your play by seeing tactics better.” - Martyn Kravtsiv

Written along similar lines to Gambit’s earlier Ultimate Chess Puzzle Book, this new work presents 600 puzzles, mostly from the last two years, that are chosen for instructive value and maximum training benefit. To ensure that few will be familiar to readers, Kravtsiv has deliberately chosen positions from obscure games or from analysis. If you find the right answers, it will be because you worked them out yourself!

The solutions feature plenty of verbal explanations of the key points, and cover most of the logical but incorrect answers. The book is completed with a set of ‘no clues’ tests, and an index of themes that will be useful to coaches and those looking to focus on specific aspects of tactics - or just seeking extra clues!

Martyn Kravtsiv is an experienced grandmaster from Lviv, Ukraine. His tournament results include tied first places at Cappelle in 2012 and the 2015 Ukrainian Championship, as well as being blitz champion of the 2008 World Mind Sports Games (at age 17). He represented his country at the 2017 World Team Championship and was a coach for the team that won silver medals at the 2016 Olympiad.

008 Difficulty Ranges for Each Chapter

Part 1: With Hints, Questions and Tasks