The store will not work correctly in the case when cookies are disabled.
Article Number
LOGUFAORFTPP
Author
Eduard GufeldNikolai Kalienchenko

An Opening Repertoire for the Positional Player 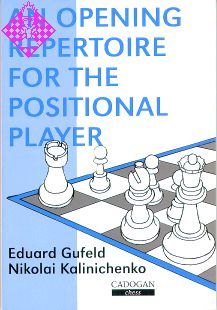 One of the hardest tasks faced by competitive chess players is the development of an opening repertoire suited to their own style of play. As in their companion volume An Opening Repertoire for the Attacking Player (also translated by Ken Neat), the authors provide a refined and thoroughly up-to-date opening program, this time selecting variations of a more positional nature.

Eduard Gufeld is one of the most popular and widely travelled grandmasters, and is known throughout the world as a coach, opening theoretician, journalist and author.

Nikolai Kalinichenko, author of more than 30 chess books, holds the international master title in correspondence chess and enjoys a growing reputation as a specialist in opening theory.

154 12 Deviations by White from the Classical Variation