The store will not work correctly in the case when cookies are disabled.
Article Number
SCKINPPANGPE
Author
Daniel King

From the series »Power Play« 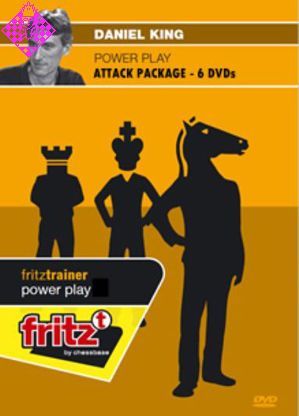 These are probably the most enjoyable parts of chess. Learn everything you need to know about the art of attack from Daniel King: mating patterns, attacking the enemy king, pawn storms, the art of attacking tactics and much more! You’ll be well prepared for any adventure with this package, which includes Powerplay DVDs 1, 2, 3, 13, 14 and 20!

You think you have seen enough checkmating combinations? I find it staggering how many checkmates are missed (by both sides) in games by the top players, let alone by us mortals. Recognising the early outlines of mating patterns is a vital skill, not just for an attacker, but for a defender too: surviving wave after wave of threats can be discouraging for your opponent. Very often we see these checkmates when they are put before our eyes: on a puzzle page in a chess magazine, for example. But then we must ask ourselves, why do these kind of mating combinations occur time and again in games - at all levels? In an actual game, when we are distracted by other factors - positional, strategic, tactical and psychological, not to mention our old friend time pressure - it is all too easy to miss these mating combinations. No one stands behind us whispering ‘Stop! It is mate in 3’ (unless you are cheating and someone has flicked on Fritz.) Moreover, these critical moments often occur late in the game - generally near the time control. Therefore it is vital that we are able to recognise these patterns - quickly! There is no excuse: now is the time to revise and rehearse those mating patterns.

Checkmate ends the game - that’s an undeniable fact. Yet one sometimes gains the impression that players who gleefully and unashamedly play for the attack are treated as a joke by their colleagues. Launching a successful attack is a skillful business that often demands great creativity. And like most themes in chess, this is a skill that can be honed and polished. In this second DVD in the Power Play series, Grandmaster Daniel King looks at attacking play and asks, what makes for a successful attack? At the end of the DVD you can test your attacking and defensive skills by examining a series of specially selected test positions. The Power Play series is suitable for anyone looking to improve their chess, but also provides ready-made lessons and exercises for a trainer. Video running time: 4h 56min

Launching a successful attack is a skilful business that often demands great creativity. And like most themes in chess, this is a skill that can be honed and polished. In this 3rd DVD in the Power Play series, Grandmaster Daniel King examines more devilish methods of attacking the castled king - this time by means of a pawn storm. But which is the right pawn to use? And when is the right moment to launch a pawn in the direction of your opponent’s king? At the end of the DVD you can test your attacking and defensive skills by examining a series of specially selected test positions. The Power Play series is suitable for anyone looking to improve their chess, but also provides ready-made lessons and exercises for a trainer. Video running time: 5h 50min

What is a squeeze? When you take control of a game, deprive your opponent of counterplay and slowly squeeze the life out of your opponent. The motto of the squeeze could be: “To win one hundred victories in one hundred battles is not the acme of skill. To subdue the enemy without fighting is the acme of skill.” from The Art of War, Sun Tzu, Chinese general, born c. 500 BC This DVD will help you to recognise when a squeeze is possible and how to execute it.

On this DVD Grandmaster Daniel King:

- shows how strong players use their tactical awareness

- puts your tactical abilities to the test

But this is a test with a difference. Although the emphasis is on tactics, there are also positions that require a strategic solution. You don’t know what’s coming next...

Every chessplayer should have the ability to play a direct attack against the enemy king. Positional chess is important but one has to be able to recognise when to launch an attack. Checkmate ends the game. This DVD has two aims: To test your attacking ability To provide you with an arsenal of potent attacking ideas Using the new Fritz Trainer interactive system, Grandmaster Daniel King presents ten exemplary attacking performances. At key moments he stops and asks you to play a move. King then gives feedback on the most plausible continuations using video clips. It’s the next best thing to having your own personal trainer!

Daniel King is a grandmaster, author of numerous chess books, successful trainer and probably the world's most popular commentator of major chess events on television, radio and the web. With his "Powerplay" series he now offers a comprehensive 25-DVD training program for all phases of the game, from "Start right" right through to "pawn storms" and "practical rook endings".