The store will not work correctly in the case when cookies are disabled.
Article Number
LOHARBTFD
Author
Pentala Harikrisna

Beat the French Defense with 3.Nc3 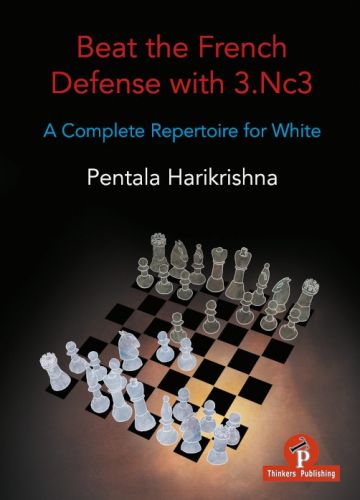 GM Pentala Harikrishna is an established elite player who has been in India’s Olympiad team for over two decades. Since November 2016 Harikrishna has often entered the top 10 of the world rankings, and has consistently stayed in the top 20. His peak rating is 2770 and he is well known for his exceptional endgame skills as well as for the ability to convert positions with a slight or even no advantage.

Harikrishna learned chess from his grandfather at the age of 4, and swiftly progressed up through age-group tournaments until he became a grandmaster at age 14. He has been World Junior Champion (2004) and Asian Individual Champion (2011). As part of the Indian national team, he has won bronze medals at the World Team Chess Championship, gold and bronze at the Asian Games, and silver (twice) at the Asian Team Championship. He has also won many major open and invitational tournaments, including the Marx Gyorgy Memorial (2006), Tata Steel Group B (2012), Biel MTO (2013), Edmonton International (2015) and Poker Stars Isle of Man (2015).

In this book on the 3.Nc3 French, Harikrishna offers practical ideas from White’s perspective to make your preparation more effective. At times, this means suggesting the 2 nd or 3 rd choice of the engine. He builds on the material from his earlier French course (Chessable, May 2019) and has expanded it with new analysis in all the lines, especially the 3...Nf6 4.e5 Nfd7 5.f4 variation. Harikrishna analyzes both 5.Nce2 and 5.f4, so that the reader may make an informed choice about their personal preference. The driving force throughout is to keep the book clear-cut and practical. A good example of a practical weapon is the deceptively simple 3 ... Bb4 4.exd5 line. There are also fresh and interesting suggestions against the sidelines you are likely to encounter, especially at shorter time controls. The entire Thinkers Publishing team joins with the author in wishing you enjoyment and success from this exceptional book.