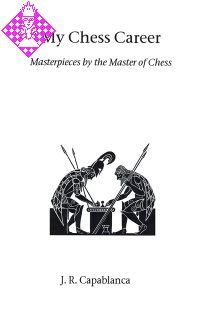 Masterpieces by the Master of Chess

The seminal work of the Cuban genius who repeated the exploits of Morphy, suddenly bursting onto the European scene and annihilating the great masters who had hitherto dominated the international arena. This book captures the magie of Capablanca's early victory at San Sebastian 1911 and his second place - bowing only to Lasker - at St Petersburg 1914 . All in all, 3S games are annotated by Capablanca in person with remarkable objectivity - bestowing praise and hurling critieism as and when required.

CAPABLANCA was a natural chess genius in the mould of Morphy, Kasparov and Fischer . He has been described as the Mozart of chess to Alekhine's Beethoven. Capa - as he was known - was born in Cuba in 1888, and by 1921 he was World Champion, having disposed of Lasker in a match where the defending champion could not win a single game. Capa was virtually indestructible and it was only towards the end of his career in the late 1930's that the younger generation could begin to score consistent victories against hirn. Meanwhile his reputation for invincibility remains in the annals of chess .

027 The Match with Marshall

052 The Period of Evolution. The San Sebastian Tournament of 1911

071 The Period of Transition

Part 2 The Period of Full Development

097 The second visite to Europe

147 Up to and including the Rice Memorial Tournament

177 Up to and including Manhatten Chess Club Masters Tournament

192 The Match with Kostic and the Hastings Victory Congress