The store will not work correctly in the case when cookies are disabled.
Article Number
SCDAVCFS
Author
Nigel Davies

From the series »Fritz Trainer Psychology« 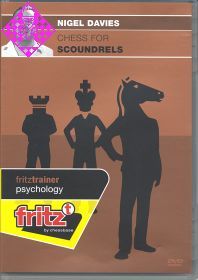 Psychology is one of the most important aspects of chess, yet most players put themselves at a serious disadvantage by ignoring this aspect of the game.

Being 'nice' is all very well in civilian life, but in the war zone of the chess board a more ruthless approach is required. The fact of the matter is that a good chess player must be something of a scoundrel in order to survive.

On this DVD Davies discusses the various ways by which a player can conduct psychological warfare, from inducing Pavlovian responses to insulting the opposition withprovocative moves. A knowledge of these methods is essential for the serious tournament competitor, if only to avoid becoming another victim. Video running time: more than 4 hours.

Pentium-Processor at 300 Mhz or higher
Details