The store will not work correctly in the case when cookies are disabled.
Article Number
LXTKAOBSTD
Author
Sergei Tkachenko

One Bishop Saves the Day 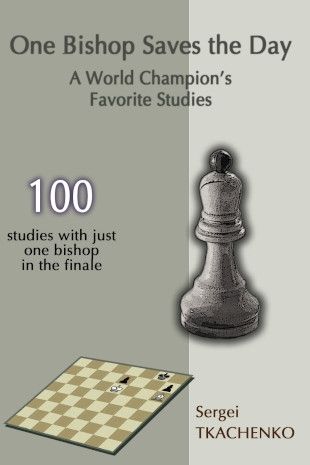 Sergei Tkachenko, a member of the Ukrainian team that won the 5th World Chess Composition Tournament in 1997 and which came second in 2000, 2004, 2013, and 2017, has collected 100 studies whose common theme is that white ends up with just one bishop in the finale, yet manages to win or draw.

There are no more than six moves in any solution, so experienced chess players can analyze the positions directly from the diagrams. Newbies to chess problems will also find analyzing these studies useful. The diverse set of tactical ideas involving a single bishop in the finale will enable them to gain a deeper understanding of the bishop’s resourcefulness.

Some of these studies are classics from bygone ages. Others were originally published in the Soviet Union or ex-Soviet countries. Several are Sergei’s own compositions.

This is the third book in a series of endgame studies by Sergei Tkachenko to be published by Elk and Ruby Publishing House.