From the series »The Heart of Go« 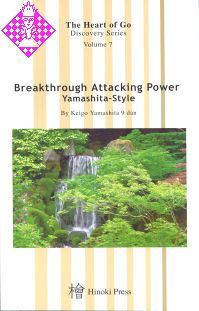 Everybody loves a good fight. There is nothing better to get the adrenalin pumping and the heart racing. While playing go, it is even more enjoyable than capturing the opponent's stones. In Japan today, perhaps Yamashita Keigo is the most successful attacking player on the go scene. His effectiveness in attacking has brought him to the pinnacle of the go world, winning the Kisei title.

In this book, Yamashita retraces his career, from his first forays as a fledging professional to one of the masterful games that gave him the Kisei title. Over ten chapters, he analyzes these games in detail, starting with Highlight Scenes that he presents of the games to follow and where he challenges the reader to find the best move. Then he explains the essence of his approach to the game and the key to attacking. The next chapter offers problem positions from 12 memorable games that he played, selected by his teacher, Kikuchi Yasuro, who for many years was one of the top amateur players in Japan. The final chapter contains biographical information and an intimate look at Yamashita's growth and maturity as a go player.

Rather than being a brilliant or flashy player, Yamashita has achieved success through tenacious and indomitable play. That characteristic has served him well and is the kind of thing that can be emulated by anyone. This book gives a complete picture of Yamashita's development and the most notable aspects of his play. Altogether, it is instructive, entertaining, inspiring and informative. It shows how go is currently being played at the highest level and the attacking innovations to be seen there.

Chapter 1 The Stage of Depending upon Power

Chapter 3 Kikuchi Yasuro: Yamashita Style - The Only Move to Play Next